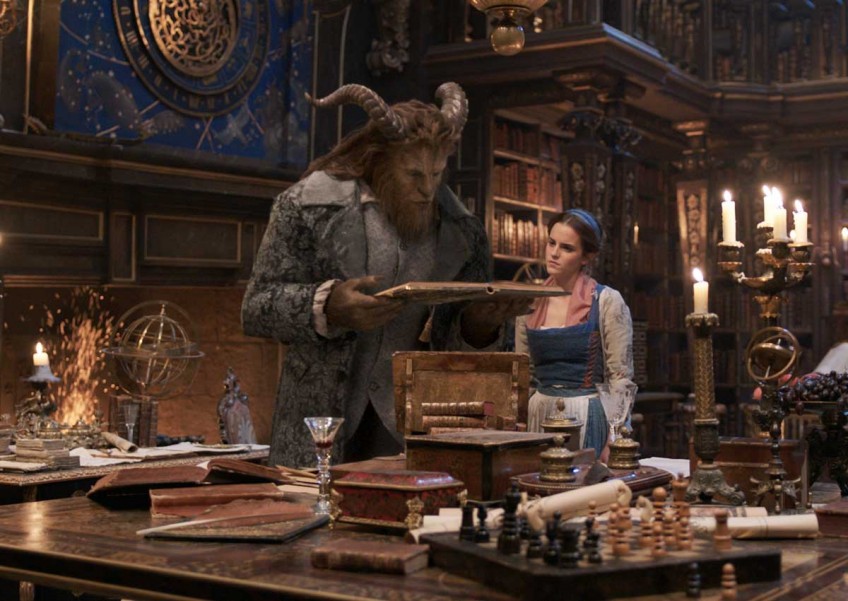 Emma Watson has loved the Oscar-winning 1991 animated film, Beauty And The Beast, since she was four years old.

"The original was so sacred to me, I watched it ad nauseam as a child.

"Belle was this feisty young woman who spoke her mind, had these ambitions, and was incredibly independent and wanted to see the world," said the 26-year-old British actress.

Now Watson herself is reprising that same character in the new live action movie musical based on the Disney classic that became the first animated film to be nominated for a Best Picture Academy Award, and she said she feels a responsibility to her younger self.

"I know that seeing Belle on screen affected how I viewed myself. I really felt the responsibility of protecting and defending the original DNA of this progressive young woman, who wasn't a princess and who wanted to define her own destiny," she said.

Opening here tomorrow, Beauty And The Beast tells the familiar fairy tale about the bright and beautiful Belle who is taken prisoner by the Beast (Dan Stevens) - actually a prince cursed for his arrogance - in his castle.

Belle befriends the enchanted creatures in there that are also under the curse, and she inspires the Beast to become his better self as they get to know each other.

At our interview at the Montage Beverly Hills hotel, Watson wore a lacy white Oscar de la Renta dress, the black bodice stylishly wrapped as a big bow, reflecting the unconventional fashion sense and increased poise she has developed as her career progressed.

She has come a long way from the shy nine-year-old overwhelmed by public attention back when she scored her first big role in 1999.

She muses on what went through her mind after 12 years of playing Hogwarts witch Hermione Granger, in the Harry Potter movies, came to an end.

"I came out of it going, 'Whew, okay, my life got turned upside down, so what next? Do I have any other roles in me, and does anyone even want to see me in anything else?'"

She then made the decision to go to college.

"It was super, super important to me, and I made that a focus. I think I just kind of needed to go away and gain some perspective."

In 2014, she earned a bachelor's degree from Brown University, in the US, in English literature.

She loves the fact that Belle "is an activist within her own community", as it is front and centre in her own life as well.

In January, the UN Women Goodwill Ambassador and her mother joined the Women's March in Washington DC, protesting the inauguration of US President Donald Trump.

"It was my first march. My mother rang me up and says, 'When are we booking our flights to Washington?'

"I was just so touched that she was willing to fly from England to be there with me.

"And the atmosphere at that march was like nothing I had ever experienced. It felt like we were doing something incredibly serious, it felt very joyful."

In addition to all the classic songs from the original movie, three new tracks have been added.

The actress, who famously turned down the female lead role in this year's award-winning movie musical La La Land, which eventually went to Emma Stone and won her the Best Actress Oscar last month, had to take singing lessons for three months to prepare for Beauty And The Beast.

"I've always wanted to sing," she said. "This has been a dream come true for me."

She has kept up with the lessons as she found they changed her speaking voice and gave her more confidence, and she would love to do more musical films.

Another perk was getting to wear the iconic yellow ballgown in the scene where Belle dances with the Beast.

She said: "The dance is so symbolic of how they fall in love. We decided the most important thing was that it would almost fly and would be like a third character in the sequence.

"It completely floats. It moves beautifully. It just looks like the most romantic dress when it's moving."

The gown was reportedly created using multiple layers of light satin organza dyed yellow - 55m of it - which was cut broadly in a circular shape and required about 915m of thread.

The top two layers were printed with gold-leaf filigree and accented with 2,160 Swarovski crystals. It took over 12,000 hours to make (there were multiple copies).

With all her Harry Potter millions, Watson said the best thing about having money is the freedom to not worry about it.

Her idea of luxuries?

"A warm bath. A really lovely dinner. Being able to travel, audio books, seeing the world. I am not buying Maseratis or anything like that," she said with a laugh.

But she said she will never reveal where she lives.

"I don't want to live behind bars or gates. I want to be able to live in a community and have a normal life. So I will never make it public where I am spending my time."

And she does like to be alone, being a self-confessed introvert and homebody.

Said Watson: "It took me a long time to understand that. Before, I thought there was something wrong with me. But I need quite a lot of quiet time and time alone, and that is how I put myself back together again. And if I don't get enough of that, then I start to feel a bit strained."