Here are the new Fantastic Four 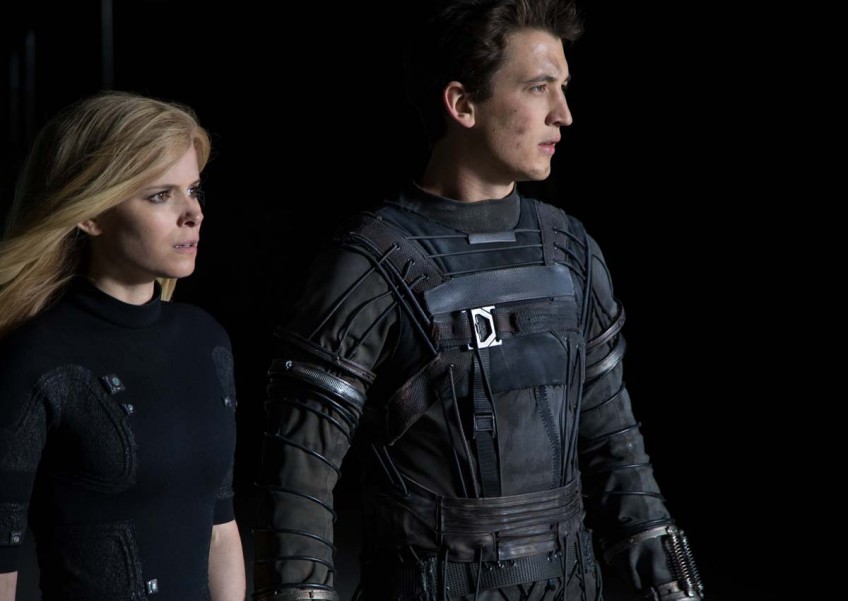 Are superhero movies killing Hollywood or saving it?

Many believe the box-office success of blockbuster comic-book adaptations makes it harder for small character-driven dramas to reach the screen and that all the cookiecutter sequels and remakes represent a creative low point for the industry.

But leaping to the defence of the superhero craze are two actors usually seen in films at the other end of the spectrum: Miles Teller, who played an ambitious music student in last year's Oscar-winning indie sensation Whiplash, and Michael B. Jordan, who starred in a racially charged true story in Fruitvale Station (2013).

Speaking to Life in New York, they argue that superhero movies can help independent films such as these get off the ground and help indie actors like themselves find a larger audience.

Of course, it is not entirely a surprise to hear them say this now that they are headlining the latest film to jump on the comic-book hero bandwagon, Fantastic Four.

Matthew Vaughn, one of the film's producers and the director of Kick-Ass (2010) and X-Men: First Class (2011), says there are too many superhero movies.

But the cast say this is simply the result of giving cinemagoers what they want.

"There are a lot of them," concedes Bell, the 29-year-old English actor who appeared in Billy Elliot (2000) and Snowpiercer (2013). "But it's supply and demand - if people keep going to see them, they'll keep making them."

Teller, 28, agrees. An indie darling after films such as Whiplash and The Spectacular Now (2013), he admits that "there are not a lot of good movies out there" in the superhero genre because "for the most part, the movies they make are just feeding (the need for) entertainment".

The actor, who stars in the Divergent young-adult science-fiction films, has caught flak for saying he had signed on to the franchise for "business reasons" even though the role made him feel "dead inside".

Now he says catering to the need for escapism goes with the territory: "People want to be entertained and that's absolutely our job as actors - to have people come to the theatre and forget about things, to give them some sense of happiness and satisfaction."

Furthermore, he repeats an argument many stars in his position have made, which is that they can use the clout they get from doing these blockbusters to help get smaller passion projects produced.

"If this movie's big, we can easily get a Fruitvale Station made, or another small one," he says.

Does Hollywood's focus on such films not crowd out other actors or film-makers who want to do, say, a thoughtful adult drama?

"Not at all," he insists, and points out that the talent pool for independent cinema and large studio productions can overlap.

For example, Fantastic Four director Josh Trank was discovered after he created an 85-second Star Wars-themed short, Stabbing At Leia's, which went viral online in 2007.

He then got the chance to make his debut feature, Chronicle (2012), which starred Jordan as one of three boys who acquire special powers after discovering a strange power source. Made for just US$12 million, it become a critical and commercial hit and paved the way for him to helm the US$122-million (S$168-million) Fantastic Four.

"You get these small guys like Ryan, he's doing Creed now," he says, referring to the upcoming sports drama starring Jordan as the son of the Apollo Creed character from the Rocky films.

When indie films do well at festivals such as Sundance, "it gives these guys an opportunity and they usually make that jump" to doing bigger films, Teller says.

That is how the next generation of film-makers is discovered, adds Jordan, who says studios are naturally on the lookout for "the next person who's able to do big things" with few resources.

For actors like them, playing a superhero invariably means reaching a much larger audience than those that saw their indie projects - and of course a bigger pay cheque.

But the Fantastic Four cast say their involvement in this film does not mean they will stop doing smaller movies.

"I think the goal is to always be able to go back and forth," says Jordan.

"The appeal of this is that it's a film that's going to be seen all over the world, it gives you more options and opportunities to do pretty much whatever you want to do," says the actor, whose Fruitvale Station was shown on a limited number of screens in the United States and elsewhere, as was Whiplash.

Mara, who is best known for the television drama House Of Cards, points out that Trank's goal was to have the best of both worlds for Fantastic Four: "Josh wanted to make a character-driven superhero film.

And I've always wanted to work with these guys. So it just felt like a no-brainer."

The foursome certainly seem to have clicked while making the movie and, like their characters - who were among the first superhero characters to be shown clashing with one another - they banter and bicker like siblings, often finishing one another's sentences during press interviews.

They also bond over the skin-tight lycra bodysuits they wore in a lot of their scenes.

Mara was the only one who did not mind her costume. "My bodysuit was quite comfortable - I don't think theirs were quite as comfortable," she says, noting that Teller's had stiff metal and plastic components.

"Yes, look at mine," says Teller. "I'm like bungee-ed up from head to toe. The plastic rings were really uncomfortable."

If the outfits were the worst part of making a superhero movie, what was the best part, Life asks.

"The parties," quips Teller as his co-stars chuckle.

"I'd say the best thing is acting with one another," Mara says.

But there could be a big downside too - the stars acknowledge that while appearing in such a film is a big boost for their careers, the stakes are higher as well.

"Success is the best thing and not-so-much-success could probably be the worst thing," says Jordan.

"Yeah," says Mara. "The worst thing would be if it failed."

Check out other movies that are opening in cinemas on Aug 6 here.