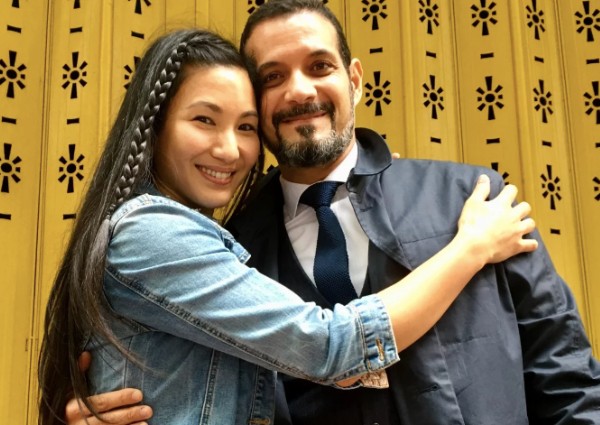 A couple for more than two years, Marsha Yuan and Mehdi Elajimi will be married in Hong Kong this month.
South China Morning Post

How they met. The first date. The first kiss. The proposal. In a new series, we talk to couples in Hong Kong - young, old, multi-faith, multi-racial, LGBT - about their relationships and the obstacles to love they've overcome, whether personal or political.

First up are US-born Marsha Yuan (she was raised in Los Angeles and studied musical theatre at New York's American Musical and Dramatic Academy) and Mehdi Elajimi, her Moroccan-born investment banker fiance who spent most of his life in France.

Yuan is many things - singer, pole dancer (she won the 2008 International Pole Dance Championship in Manila), yoga teacher and 1st runner-up in the Miss Hong Kong 1999 pageant (she represented Hong Kong and China in the 1999 Miss World Pageant in London).

She is also an actress, having starred in TVB sitcoms such as War of the Genders and popular movies such as Men Suddenly in Black.

It's in her blood (her mother is famous Chinese actress Cheng Pei-pei, best known internationally for playing Jade Fox in the 2000 hit Crouching Tiger, Hidden Dragon).

Marsha recently portrayed unlucky-in-love Mimi in the play Hong Kong Love Stories. But off stage she's lucky in love and on February 22, after dating for two-and-half years, Marsha and Mehdi will take their relationship to the next level by tying the knot at the Aberdeen Marina Club.

We meet in a coffee shop where the couple share the good, the bad and the beautiful about finding love in Hong Kong.

MARSHA: We met on [dating App] Coffee Meets Bagel. I had a few strike outs on dating apps - I experienced ghosting, you know, when the other person just disappears. One other guy sent me a 'let's not see each other' by text. Yes, such a man!

MEHDI: Coffee Meets Bagel, well that App requires more effort from people - it's not like Tinder. It's funny because I don't even drink coffee and Marsha's addicted.

MEHDI: When I arrived in Hong Kong from Paris in 2007 I was married - I got a divorce 2015. I told Marsha from the start that I was going through a divorce.

MARSHA: My sister and her husband said I shouldn't date him because he's going through a divorce but that made me want to date him even more [laughing]. My sister and brother-in-law - he's more like my brother - they're protective of me. They've seen me get hurt in the past. When I first saw Mehdi on the app I really liked his eyes. I thought they looked kind. I later found out that he spends his Saturdays working at a sushi restaurant in TST just for fun - I found that interesting. And he's into Brazilian jiu-jitsu which is great because I love active men. And I like that he's a bit of a dork - he's not your typical banker w***er.

MEHDI: What caught my eye in her [dating app] profile? Hmmm, there was something different with her pictures. Some women, they over-exaggerate in their pictures, like those horrible lift and bathroom selfies. But Marsha's pictures were natural and of course she's beautiful. And she's active, which I love.

MARSHA: Yeah, those women with loads of makeup trying to be sexy. For our first date we met on a Sunday. I was jet-lagged. We met after I took a pole dancing class.

MEHDI: We went to a Mexican-Asian fusion restaurant and it was difficult to cut the food into two pieces - she likes to share. On the first date she was like 'oh, I'm seeing other guys until I find the right person'. I went through a lot of tests ... It would have been easier for me to get hired at a top-tier investment bank. After dating for a bit she told me that her mum was in a movie - a movie that I had watched about 25 times [Crouching Tiger, Hidden Dragon]. Her mum plays the evil Jade Fox. When we met, she was very sweet. It's nice to be around her. The next step was the dad - he was a little harder.

MARSHA: Mehdi offered to go on a hike with my dad which was very touching - none of my ex-boyfriends would have done that. While dating I taught him yoga and he's learning guitar from me. I really want to get him on the pole.

MARSHA: Our first holiday together was during CNY and we went to LA just a few months into official relationship - official as when we had our first kiss. I'll let Mehdi talk about this because I've talked about it in a few cabaret shows so I want to hear his version of events.

MEHDI: Of course I remember the first kiss! Hong Kong was being hit by a typhoon. I ended up at Marsha's place and she made dinner and wanted me to watch the movie When Harry Met Sally. So it was typhoon 8 or 9 and we watched the movie and I left in a taxi and was also home in SoHo and she messaged and she said 'I was waiting for my kiss' and like woooow. So I took another cab back to hers.

MARSHA: The next day we did a dating app erasing ceremony. Now we're getting married.

MEHDI: I proposed on New Year's Eve in Marrakesh when my family and Marsha's met for the first time. We rented a huge place for 30 people for a week - family and friends from everywhere. I was going to propose in Sydney on our one-year anniversary but held off until we were all together. I had a plan but it didn't work out! I had arranged for a Moroccan band to play and for me to propose while on the dance floor then suddenly my jiu-jitsu master took out a purple belt and gave it to me, throwing a spanner in my proposal plan.

MARSHA: Yes, it all went to s*** (laughing). I went over to congratulate him on getting his belt and it was then that he suddenly got on his knee and it took me a few seconds to realise what was going on. The box even had a light in it, like a little spotlight shining onto the ring. It was so theatrical. It was a good time even if both families didn't speak the same language. I started to plan early. It's a medium sized wedding - less than 150 people.

MARSHA: We want to start a family asap, not lots of kids but one or two - and a dog. We love dogs and one of our first discussions was about that because my dog passed away last year - a cute toy poodle. But we don't agree on a breed. Mehdi likes big dogs but most big dogs shed and I get itchy from that so I want a small one. We sort of compromised the other day when we saw a black and white Maltese/poodle cross in the street. It was curly and cute and small. ... oh listen, they're playing our song."