A renowned contemporary artist from mainland China, Zeng's artwork famously sells for millions: notably, Mask Series No.6 which sold for US$9.6mil (S$3.2 million) in 2008, and The Last Supper which sold for US$23.3 million in 2013.

Speaking of his friendship with artist Zeng who painted his concert theme, Lau said: "I have known Fanzhi for more than 10 years. At that time, I had wanted to study oil painting. I was filming in Beijing. Coincidentally, we had mutual friends who introduced us so I was able to pay a visit to Fanzhi at his work studio. I really wanted to learn from him, but I didn't dare to say it then. I hope that one day I can learn to paint with him."

The Hong Kong Heavenly King had originally planned a year-end concert at Hong Kong Coliseum in 2017, but was forced to cancel it when he suffered serious injuries in a horse-riding mishap while filming a beverage commercial in Thailand. 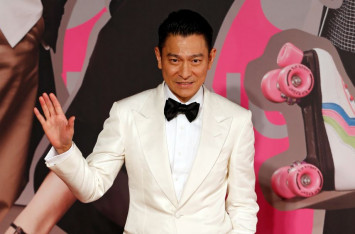 Lau had to take a hiatus from showbiz as he had suffered multiple pelvic fractures and muscle tendon strains, after being thrown off a horse which also stomped on his back.