Hold on to your hoverboard: 'Back to the Future' is now 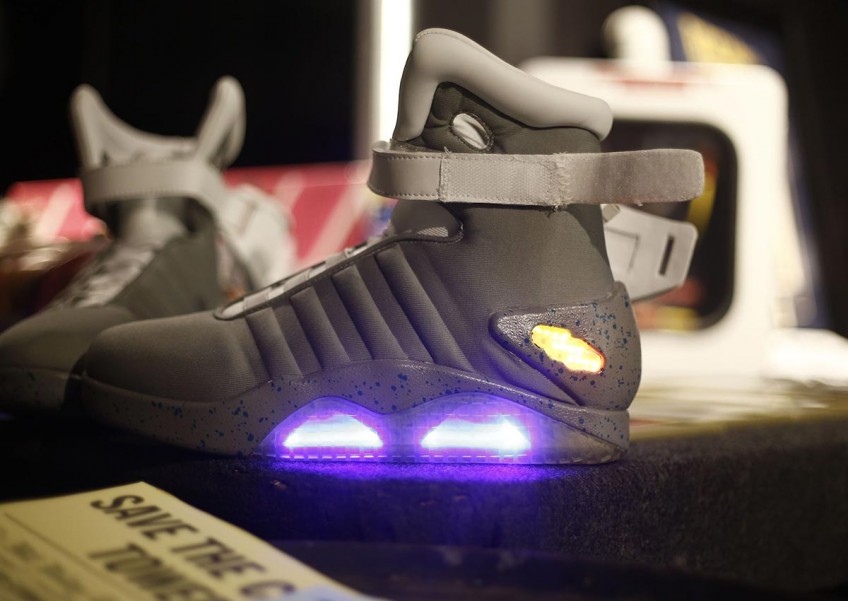 WASHINGTON - Welcome to the future. October 21, 2015 is the date "Back to the Future" professor Doc Brown and Marty McFly journey to in their time-traveling DeLorean in the much-loved movie trilogy.

The world as imagined by director Robert Zemeckis - with hoverboards, self-lacing sneakers and flying vehicles - seemed a long shot when "Back to the Future II" came out in December 1989.

Fans of the series are marking Wednesday's landmark date by celebrating some of the predictions that came true in the futuristic saga - and some that didn't.

The films follow the time-travelling adventures of young Marty, a teenager living in small-town America in 1985 played by Michael J. Fox. He sets out in a DeLorean car converted to voyage the space-time continuum by his eccentric inventor friend Doc Brown.

"I was a teenager when the film was released. I remember thinking it will be fun to watch it later when I have a family," said Brad Russell, founder and president of the Washington West Film Festival, which is organising a retrospective on the series.

"We watched it this year with my family. It was rewarding." Russell is organising a marathon projection of the three films, which came out in 1985, 1989 and 1990. Many other movie theatres are doing likewise.

He even managed to get the town of Reston, Virginia outside Washington to change its name for the duration of the festival.

A billboard that reads "Welcome to Hill Valley" - the fictitious town where the film takes place - is to greet hundreds of collectors of DeLorean cars expected for a parade on Sunday.

A red carpet will be unfurled for Christopher Lloyd, who plays Doc Brown, and Bob Gale, who wrote the script for the trilogy.

In California, where the movies were filmed, fans dressed up as Marty will gather outside a fast food restaurant where the young hero grabs onto a pickup to speed his skateboard ride to school.

And on Saturday, "Back to the Future" buffs will be able to party at the "Enchantment Under the Sea", the high school dance where Marty's parents fall in love in 1955 in the first film of the series.

A documentary by Jason Aron entitled "Back in Time" also debuts Wednesday in the United States, in which the film's stars talk about its impact on popular culture.

Auto manufacturer Toyota, a favourite of the hero of the film, has jumped into the fray, too. The website www.toyota.com/outatime features a discussion between Lloyd and Fox on the inventions imagined in the film and which became reality - from faxes to videoconferences.

Even the White House is jumping into the anniversary, organising online debates with specialists on the question "What does 2045 look like?"

"Predictions is a fun conversation we are having," Russell said.

Some are still being worked on, such as increasingly sophisticated prototypes of the famed hoverboard and dog-walking drones, which also feature in the film.

One joke that has long gone unnoticed outside the US resonates big-time for Americans: the success of the Chicago Cubs baseball team.

In the second instalment of the series, the team known affectionately as the "lovable losers" wins the 2015 World Series. And now to the surprise of many the team is in this year's playoffs, one step away from the championship series - which they last won way back in 1908.

Several companies are cashing in on the "Back to the Future" anniversary.

Nike is releasing a version of the self-lacing Nike Mag shoes that Marty wore in in the movie and Pepsi will sell limited-edition "Pepsi Perfect" - Marty's soda of choice in the blockbuster series.

"We are excited to be part of this moment and to bring fans something only Pepsi could deliver - and there's no need to wait - the future is now," said Lou Arbetter, Pepsico senior director of marketing.

The bottled drink, complete with collectible case, will sell at US$20.15 (S$28). Just 6,500 Pepsi Perfect bottles were available, and only online.