'Hollywood of the East': The rise and fall of Hong Kong showbiz

The newly opened Avenue of Stars in Tsim Sha Tsui, a tribute to Hong Kong’s entertainment industry which set the standard for Asia in the 1970s to ’90s.

The meteoric rise of Hong Kong's entertainment industry took place in the 1970s to '80s, propelled by the city's rapid economic growth.

Facing prosperity but an uncertain political identity, the booming sector morphed into a defining cultural force, shaping the identity of millions of Hongkongers.

At its zenith, Hong Kong stars were household names among the Chinese community worldwide, a source of pride for the city. In the past decade, however, with fans' attention turning to K-pop and local artistes taking their acts to the more lucrative mainland market, some of this lustre has been lost, and with it, an important element of what it means to be a Hongkonger.

This week, City Weekend looks at the rise and fall of the entertainment scene and the fortunes of pop idols in Hong Kong during those glory years when the industry was dubbed the "Hollywood of the East".

HOW DID HONG KONG ENTER ITS GOLDEN ERA OF SHOWBIZ?

In the 1980s and '90s, Hong Kong's film industry was the third-largest in the world after Bollywood and Hollywood. By then, names such as Jackie Chan, Bruce Lee and filmmaker Wong Kar-wai had gained international stardom.

But the blossoming of showbiz in Hong Kong came a decade before such heights. Canto-pop took rise in the mid-1970s when "God of Songs" Sam Hui Koon-kit began singing love songs in Cantonese. Marrying the tones of Western music with modern Chinese lyrics sung in Cantonese, the emerging style immediately captured the hearts of Hongkongers.

The city's entertainment industry came together, as television, film and music formed a collective empire. Rivalries that developed between local television powerhouses, such as TVB and what has since become ATV, became one such stage for Canto-pop's explosion.

In the 1980s, all-rounded film, television, and music performers such as Leslie Cheung Kwok-wing, Maggie Cheung Man-yuk, and Anita Mui Yim-fong spread Hong Kong's culture to the world. In an industry where stars can rise and fall with the sun, Hong Kong's first superstars have remained well-loved and revered, some even in death. 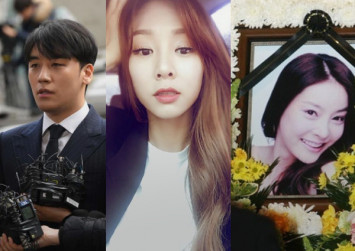 In 1992, Chinese-language newspaper Oriental Daily News coined the term "Four Heavenly Kings" for the biggest names in the industry at the time: Jacky Cheung Hok-yau, Andy Lau Tak-wah, Leon Lai Ming, and Aaron Kwok Fu-shing. Like many then, they dominated their field by singing, acting, dancing, and in Lau's case, even producing.

As the page turned on a new millennium, stars such as Eason Chan Yick-shun, Miriam Yeung Chin-wah, Nicholas Tse Ting-fung and Joey Yung Cho-yee burst onto the scene, capturing the hearts of Hong Kong's younger generation.

While the entertainment industry has proven itself integral to Hong Kong's cultural identity - such as bringing generations of Hongkongers together at concerts and parties for year-end awards shows - over the last two decades, however, annual music record sales have dropped from HK$1.6 billion (S$277 million) to HK$200 million.

Sadly, this is not an isolated trend. The film industry has also seen decline in the past decade. The city produced more than 400 films a year in the early '90s, but this figure dropped to as low as 60 in 2017. In 1996, five of the top 10 grossing films in Hong Kong were local productions. Twenty years on, only one quasi-home-made flick made the top 10.

Some blamed the slump on a talent drain to mainland China, with its soaring new-found wealth. Canto-pop started to be overshadowed by Mando-pop as the mainland opened up and groomed its own stars, fawned over by a vast domestic market.

With the dimming of Hong Kong's showbiz star came more joint productions with mainland counterparts. More worryingly for the local sector though, the flavour for fans seems to have shifted to South Korea in recent years, pitting a floundering Canto-pop scene against a more glitzy and savvy K-pop.

With its perfectly manicured stars, boy and girl bands, as well as eye-popping choreography, K-pop is a stark contrast in energy to the more intensely emotional love ballads characteristic of Canto-pop.

Global devotion to K-pop is astounding: a 2012 Korea Eximbank study found that for every HK$780 spent on production, the value of Korean entertainment exports would increase by HK$3,200.

The K-pop fan base in Hong Kong is so strong that the annual South Korean Mnet Asian Music Awards event has been hosted in the city since 2012.

HAVE FANS LET GO OF THE PAST?

While music sales have plunged, the growth of protest music may mark an unlikely resurgence in the popularity of Cantonese songs, turning what were once considered cheesy Canto-pop love tunes into political satire.

Lo Hiu-pan's "Raise the Umbrella", written for the 2014 Occupy protests, was voted the most popular song of the year at the Commercial Radio Music Awards in December.

Recent years have also brought Hong Kong's most adored performers from the 1990s and early 2000s back into the spotlight - much to the delight of nostalgic superfans.

And since 2016, all four "Heavenly Kings", now well into their 50s, have held sold-out anniversary concerts.

Most recently, ticket sales for Andy Lau's 2018 My Love Andy Lau world tour caused system crashes, scalping, and even a knife attack on a 58-year-old mainland man who was second in a ticket office queue.

Unfortunately, Lau tearily cancelled his later shows in the middle of a performance after suffering from throat infection, to supportive cries of "We love you, wah zai!" from audiences. The star's six axed concerts affected tens of thousands, proving his clout and stature even among today's stars.

Legions of her fans turned on Hui after he was caught on video canoodling with TVB starlet Jacqueline Wong. Some wondered if the fiasco would affect Cheng's sold-out 13-concert series in July.

Cheng has since publicly forgiven her husband after his teary press conference in which he came clean and apologised, but the ripples from the fallout remain - some have lamented the end of "Hong Kong's last fairy tale", while TVB has scrambled to manage the airing of productions in which Wong has featured in.

WHAT'S THE ROAD AHEAD?

While today's performers lack the all-roundedness of the superstars of yesteryear, local singers like Gloria Tang Tsz-kei, better known as G.E.M., give fans hope for the future. Dubbed "China's Taylor Swift", her powerful voice and lyrics have made her the biggest pop export since the 1997 handover.

When veteran actor and president of the Hong Kong Performing Artistes Guild Louis Koo Tin-lok took home the Favourite Male Singer prize at the 2018 Ultimate Song Chart Awards - the city's most recognised music award - he gave fans more reason to hope, even though cynics sneered at the unlikely accomplishment.

"I really like singing, but I don't know how to sing," Koo admitted in his acceptance speech. "What I really have to say is, thank you to the people who voted for me. I am aware that my songs aren't what everyone loves the most about me."

The 48-year-old star, known more for acting, returned to the music industry in 2018 in a duet with singer Kay Tse On-kay called One Man, One Woman and a Bathroom. Koo also addressed new and aspiring singers, noting their "fiery passion" and his hope for the future of Hong Kong's entertainment industry.

"Don't give up, our Hong Kong music scene and Cantonese songs will depend on you."