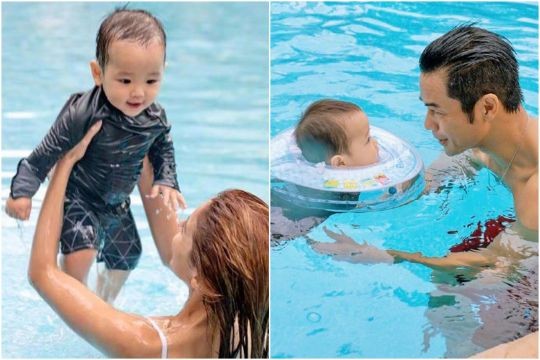 Kevin Cheng wrote on Weibo that this was the first time they were travelling together as a family to Singapore, adding "Rafa time" at the end of the post.
Weibo/Kevin Cheng

Their eight-month-old son Rafael was also with them, as Cheng posted on his Weibo account photos of the baby with him and Chan at a pool on Sunday (Oct 27).

The 50-year-old former TVB actor wrote that this was the first time they were travelling together as a family to Singapore, adding "Rafa time" at the end of the post.

Cheng, known for roles in TV serials such as Ghetto Justice (2011) and Scarlet Heart (2011), tied the knot with Chan, 28, in Bali in August last year. Their son was born on Valentine's Day this year.

The couple had reportedly dated for three years after meeting on the set of supernatural TV drama Blue Veins in 2016, where Chan played a woman who pined for Cheng's vampire hunter character.

Cheng recently shared on social media video clips of Rafael's first two words - "dada" (daddy) and "baba" (papa), with the caption: "I don't think his mom is happy about it."

Chan smiled and told Singapore media she cried for several days as her son's first two words are not linked to her. She admitted that Rafael is closer to Cheng, as she spent most of the time with the baby bathing and eating with him, while Cheng spent more time playing with him.

Cheng told reporters he is now teaching his son how to say "mama" to pacify his wife.