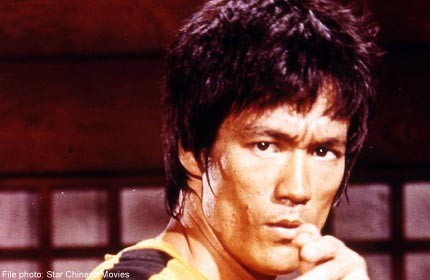 So why are some in the city marking the 40th anniversary of his death in a toilet?

"In 1958, Bruce Lee was a student at St Francis Xavier's [College]," Wong Yiu-keung, chairman of the Bruce Lee Club, explains.

"One day, he was caught in a fight in a washroom by one of the fathers.

"But the priest also boxed back in his home country. So, he didn't punish him. Instead, he invited him to the boxing classes. Lee later participated in an interschool competition and won."

The incident was significant in Lee, who died from swelling of the brain aged just 32, deciding to tunnel his love of martial arts into something positive.

A short time afterwards he opened a martial arts school in the United States, where he was born.

Fans of Lee will visit his Hong Kong alma mater this weekend as one of several stops on an unofficial "Bruce Lee trail" in the former British colony, where the star spent his childhood.

Other points on the walk include Lee's statue on the Avenue of the Stars and the Bruce Lee Club house, both in the Tsim Sha Tsui neighbourhood of the southern Chinese city, which is without a permanent museum dedicated to the screen legend.

Fans will also take in a monastery in the New Territories which featured in perhaps his most famous movie, "Enter the Dragon".

A five-year exhibition at the Hong Kong Heritage Museum, featuring memorabilia from his life and films including his iconic yellow jumpsuit, was due to be opened Saturday by his daughter Shannon Lee.

"It's through the people who knew him well, his friends, my family. It's also through his own words, because he wrote voluminously.

"I have all of his library books, thousands of books and he would underline in them and write notes in the margins, so I know him from him."

Some of those notebooks, poetry, and family photos are among 600 items showcased at the museum until 2018.

A 20th century cultural icon who founded Jeet Kune Do, Lee's untimely death in Hong Kong in 1973 left fans around the world reeling.

"I remember the funeral in Hong Kong primarily, because it was just so chaotic. There were so many people," his daughter said.

"It was hot, humid, and it was just sort of like this whirlwind. And there was so much going on and so much sadness and as a little kid, I just sort of remember being dragged through that whole process and the feeling of the chaos all around me."

Lee's legacy lived on, inspiring a new generation of actors such as Jackie Chan and breaking down barriers for Asian actors in Hollywood.

"He won his fame from Kung Fu, which does not need language to deliver," Lee's biographer Roger Lo said.

"Just like dance and music. You can watch it whoever you are. It is like Charlie Chaplin whose silent movies were borderless.

"Lee was also a bridge between the cultures of East and West. He was educated both in Hong Kong and the United States.

"He appeared on American televisions and also Chinese movie theatres," he added.

Chaplin Chang, the author of a new biography "The Bruce Lee They Knew" published this month, says that Lee's real life personality, not just screen persona, are part of his enduring appeal.

"People may give him god-like status. But he is just a human."

Chang, in the Chinese-language version of his biography, attempts to portray the action hero from an unconventional perspective, showing that the screen icon could be difficult at times but was generally friendly towards his subordinates.

"He was not only (about) movies, nor was he only (about) martial arts. With his philosophy, his legacy lives on for generations. Therefore, he is admired by many even now," Chang said.