A television show featuring a Canadian-born Chinese actress who darkened her skin to portray a Filipino domestic helper has sparked heated criticism of Hong Kong's depiction of minorities in mainstream entertainment.

The episode, which aired on Tuesday (April 12), centred on a local couple who hired Louisa as a helper but found her behaviour "spooky" and suspected her of using voodoo.

Wong faced backlash for an Instagram video of her brushing dark make-up all over her leg, in which she said "I am suntanning right now, sir" in a mocking accent.

The video has been taken down.

Wong's actions were regarded as "brown face", in which a light-skinned individual attempts to portray a person of colour or marginalised group by using make-up to darken their skin.

Phyllis Cheung Fung-mei, executive director of Unison, an NGO that advocates for ethnic minorities in Hong Kong, said a major broadcaster such as TVB should be sensitive to its depiction of the various cultural and social groups.

"As a free-to-air channel, it's really insensitive for them to produce an episode darkening a Chinese person, and making eerie portrayals of domestic workers," she said.

Cheung also pointed out that Chinese-language media had "raved" about Wong's acting, highlighting her "Filipino accent" and dark skin in the episode.

"We should be appreciating cultures, not appropriating them," Cheung said.

TVB defended Wong, saying that through her "professional performing techniques and sophisticated handling of role-playing, the character of Louisa was successfully portrayed".

"We would like to express our concern to anyone who might be affected in this matter," the company said in a written reply to the Post.

The Equal Opportunities Commission said it did not comment on individual or specific cases, and that whether an act constituted racial discrimination would depend on the facts and context of the case.

"A lot of the narratives that frame the [domestic worker and ethnic minority communities] often are adjusted to the taste of Hong Kong audiences, and therefore risk obscuring structural inequities," Vicera said.

Jose Urbano, 27, a Filipino who grew up in Hong Kong and works in the technology sector, said the city lacked real conversations and proper education on accurately representing minorities in the media.

"The local entertainment producers need to be more aware of how much danger and harm their actions are causing to the community because misrepresentation and appropriation just for the sake of entertainment is not right," said Urbano, who has also been a street dancer for a decade and performed in local shows.

He also said it was disappointing that the Hong Kong community did not share the same outrage to "call out" the show for its insensitivity.

Izzy Jose, 27, an educator with musical theatre training from the Hong Kong Academy for Performing Arts and a performing arts degree from the University of Gloucestershire, said shallow depictions of domestic workers had been entrenched in the entertainment industry. 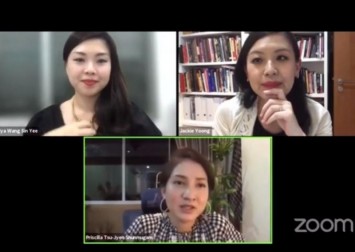 "I hope the local industry can do something to change their views, and really see domestic workers as human beings and not as caricatures. They are not a stereotype," she said. "I'm just tired of going to auditions for films and the roles are always the clumsy helper."

Jose, who grew up in Hong Kong, recalled that one of her character briefs for an audition was a domestic worker whose ward was kidnapped because the helper was "careless and always on her phone" while on the job.

Miles Sible, 28, a Hong Kong-based Filipino actress, said it was insulting to see migrant workers depicted as "clumsy, naive, careless" people over and over again on mainstream media.

Sible, who moved to Hong Kong in 2013, said it was tiring to be given only roles as "lousy" domestic workers or criminals in the background.

"I've been cast as a domestic worker 10 times already and only two of the roles were somewhat decent," she said.

"As actors, we really put our all into our performances. We can deliver more nuanced stories of migrant workers, and Filipinos who work and grew up in this city," she said.

Sible starred in the short film Ateh, about a domestic worker who had to choose between the child she had raised and her biological child.

Sible said actors should also be more selective of the roles they chose, and engage in creating more constructive narratives of migrant workers and ethnic minorities.

During the coronavirus pandemic, dozens of domestic workers who tested positive for Covid-19 were cast aside by employers, leaving them with no place to self-isolate and recover from the illness.

Wong's performance received praise from local media, including outlets such as HK01, which posted an article headlined "Franchesca Wong deliberately blackened herself to turn into [a] maid, but in reality she's a true beauty".

In another article by the Hong Kong Economic Times, Wong was lauded as a gifted graduate of the Hong Kong Academy for Performing Arts in 2019, and commended for "practising the Filipino accent" in preparation for the role.