Hong Kong television star Mat Yeung Ming has been jailed for 18 days, disqualified from driving for two years and fined HK$3,000 (S$521) over a car crash in Mid-Levels last year.

But the 40-year-old TVB actor was immediately released on Thursday (Nov 4) on HK$30,000 cash bail pending appeal, on the condition he remain in the city and report to police three times a week.

Magistrate Daniel Tang Siu-hung, of Eastern Court, said Yeung had shown an “extremely careless” driving attitude without regard for the safety of other road users, as there was no doubt he had been seriously affected by the alcohol he consumed before the accident but still chose to drive.

It was pure luck that no one was injured, Tang added.

Considering Yeung’s previous drink-driving conviction in 2005 and record of being fined for speeding and use of mobile devices while driving, Tang further concluded that the actor “clearly had not learned his lesson” and imprisonment was the only sentencing option.

As for the defence’s claim that Yeung had lost close to HK$1 million because of the case, and had shown remorse and responsibility as reflected in his guilty plea, Tang said the actor should have considered the consequences before getting behind the wheel, adding his conviction was inevitable in light of the strong evidence against him.

“The court must send a clear message that it will not condone such offences,” Tang said.

To reinstate his driving licence, Yeung will have to attend a driving improvement course at his own expense before the end of his two-year disqualification period.

Yeung was seen repeatedly wiping his left eye as the magistrate spoke, while his girlfriend, Lisa Ch’ng, cried as she sat two rows behind him. He did not respond to questions outside court.

Yeung, whose real name is Lam Ming-lok, is known for playing police officers in multiple TVB dramas, including the latest 2021 series Shadow of Justice, and in crime prevention and recruitment promotion clips for the force.

In the early hours of Aug 8 last year, he lost control of his black Mercedes on Magazine Road and knocked down a road sign.

Four months later, he admitted careless driving and illegally tinting his car windows, but denied a third charge of failing to provide a blood sample, a drink-driving-related offence of which he was acquitted following a trial this March.

The trial court heard that Yeung reeked of alcohol when two policemen carried him from the vehicle. He was said to be so confused he needed to be put in a straitjacket for a medical examination at Queen Mary Hospital.

It remains unclear how much alcohol he had consumed on the night of the accident.

But just as Yeung was about to be remanded at the conclusion of his trial, his then counsel, Cheng Huan SC, applied to reverse his two guilty pleas in an apparent attempt to secure his release. 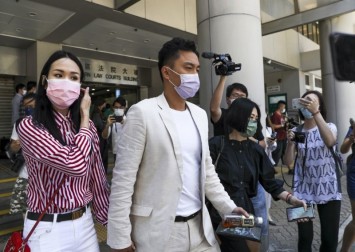 Cheng said his team had “inadvertently misled” Yeung into believing he would be spared jail.

The magistrate then reversed Yeung’s guilty plea, allowing him to remain out on bail.

Acting deputy director of public prosecutions Jonathan Man Tak-ho subsequently sought a review of that decision, arguing that the magistrate had erred in allowing the reversal and acquitting Yeung of the third charge.

In mitigation, Yeung’s new counsel, Martin Hui Siu-ting SC, said he had chosen to take responsibility for his wrongdoing, and appealed for non-custodial sentences, adding that he was willing to compensate the government for the damage caused.

Based on security footage played in court, Hui said the accident happened very quickly while the car was moving out of Yeung’s control at a slow speed downhill with a flat tyre.

The prosecution said it had investigated the alleged mechanical glitch and flat tyre, but found no evidence they had contributed to the accident.

Careless driving and unlawfully reducing the visibility of car windows are both punishable by six months behind bars and a fine.