Ardent fans of muscular K-pop sextet B.A.P might be forgiven for doing a double-take after checking out their handsome idols' new single, Coffee Shop.

Laid-back and breezy, the smooth, soulful R&B track sounds nothing like the adrenaline-pumping, heart-racing material they've put out so far.

Visually, the boys - who are best known for flaunting their biceps and milking their machismo for all it's worth - have also taken the intensity level and in-your-face directness several notches down.

Their past chart-topping hits Warrior, Power and One Shot feature B.A.P sparing no expense to show off their manliness - cue scenes of them pumping fists in front of giant robots, doing push-ups, repairing fast cars and posing with motorbikes and guns.

Coffee Shop is shot entirely in the US, with all six members of the boy band looking pensive as they take a leisurely walk down the picturesque streets of Los Angeles, Las Vegas, New York City and San Francisco.

Going by the latest statistics, this transformation seems to be a move in the right direction. The somewhat artistic music video, free of B.A.P's usual contrivance, has garnered nearly 1.7 million views on YouTube since its release three weeks ago.

Critics have given Coffee Shop the thumbs up too. It is the first single taken off their yet-to-be-titled new EP and is slated for release later this year.

South Korea's online music channel MWave calls the song "bittersweet, simple and relaxing", while US-based Korean entertainment website Seoulbeats said it was "nice to see them for once lay off the excessive streetwear... it showcases their versatility, proving that they are not just about high energy dance tunes and forceful concepts".

Not bad at all for a rookie group with only two EPs - No Mercy and One Shot - to their name.

Cream of the Crop

Definitely the cream of the crop among K-pop's rising stars, B.A.P were formed in January last year. The group comprise Yongguk and Himchan, both 23, Daehyun and Youngjae, both 20, 19-year-old Jongup and 17-year-old Zelo.

In an e-mail interview with LOUD ahead of their first ticketed concert here next month, Daehyun attributed B.A.P's image overhaul to their bold plunge into unchartered waters - the jazz genre.

"Coffee Shop is our first attempt at jazz. The melody was composed by (Korea's) famous jazz pianist Song Young Joo and it matches very well with the lyrics and rapping parts," he said.

Youngjae stressed that B.A.P were never an outfit to be pigeonholed in the first place.

"We do not limit ourselves to any genres, we are always game to try something new," he said.

"No matter what genre (we do), we hope to make great music that has our own distinctive B.A.P style."

That said, even though they've ditched their testosterone-charged vigour for Coffee Shop, keeping themselves fit and lean is still their mantra for daily living.

"All of us really love to eat, so we neither go on any special diets nor do we starve ourselves," said Jongup.

"We enjoy eating, but at the same time we exercise a lot, especially during our free time."

B.A.P's upcoming Live On Earth Concert in Singapore follows closely on the heels of their successful US tour in May.

Korean news site allkpop.com reported that all 10,000 tickets to their concert tour in Los Angeles, San Francisco, Washington DC and New York - part of the annual Asian Pacific American Heritage Month - sold out within an hour.

"It was our first visit to the US, and it was really amazing to meet fans who came specially to meet us," said Zelo.

"It was just unbelievable, hearing that our concert tickets were sold out there.

"Seeing our fans enjoy the concert and witnessing their cheers for us, it was an honourable moment for me."

For the Singapore gig, local fans of B.A.P can expect a raucous show that will bring the house down.

"Besides our group performances, we will be doing solo performances too, so please look (out for) them," said Yongguk.

"We can ensure that fans will definitely not be disappointed."

It was a trip that left them with great memories, said Himchan.

"We went to the beautiful Sentosa beaches and we'd love to go there again this time," he said.

What: B.A.P Live On Earth Singapore

Where: The Star Theatre, The Star Performing Arts Centre

Magic Makeover
It's not just B.A.P whose recent image overhaul has amazed fans.

Other Korean boy bands have, at some point in their showbiz careers, ditched their usual smart-casual get-ups of tees, vests, jackets and jeans in favour of a mind-blowing new look.

LOUD checks out three groups and their eyeball-grabbing outfits... 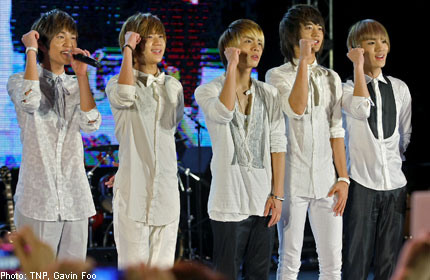 When fresh-faced quintet SHINee released their fourth EP, Sherlock, in May last year, their promotional pictures reflected a laid-back Woodstock Festival 70s vibe, quite unlike anything we had seen before in the slick and glitzy world of K-pop.

In a previous e-mail interview with LOUD, leader Onew, 23, said it was in SHINee's DNA to maintain an ever-evolving appearance.

"Instead of showing similar concepts in our albums, we try new and different things all the time," he said.

"Like a rainbow's colours, we show diverse images... It's probably the reason why we stand out (from other acts)."

Upon the release of their sixth studio effort, Sexy, Free & Single, in July last year, superstar mega-group Super Junior were propelled to an all-new level of hotness.

Bare-chested shots of members Lee Teuk - who is on hiatus from the band, having enlisted in the Korean military - Siwon, Donghae and Eun Hyuk on the album's cover and in the lyric booklet brought about swoons and shrieks from their predominantly female fan base.

The rest of the pack, while not topless, were attractive in their own androgynous way. Ye Sung (who's also in the army) wore a singlet, Sung Min sported platinum blond locks, while Ryeo Wook sported shimmering lip gloss. 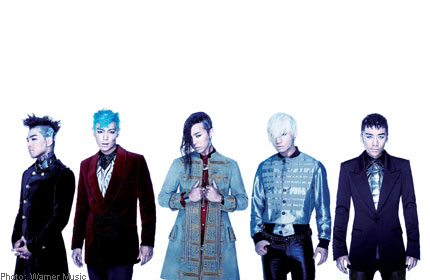 But when promotional pictures of their fifth EP, Alive, surfaced in February last year, many of their die-hards were left breathless and totally in awe.

Collectively sporting steampunk-esque, futuristic get-ups and accessories like oxygen tanks and gas masks, these uber-imaginative dudes showed that they could wear anything and look superb.

"We're trendy and we have musical talents, but something was always missing, which was Big Bang's image and colour," said 24-year old G-Dragon, when interviewed by Korean news site Ten Asia About Alive.

"We wanted people to have exclamation marks instead of question marks while listening to our music."