How I survived The Hobbit marathon 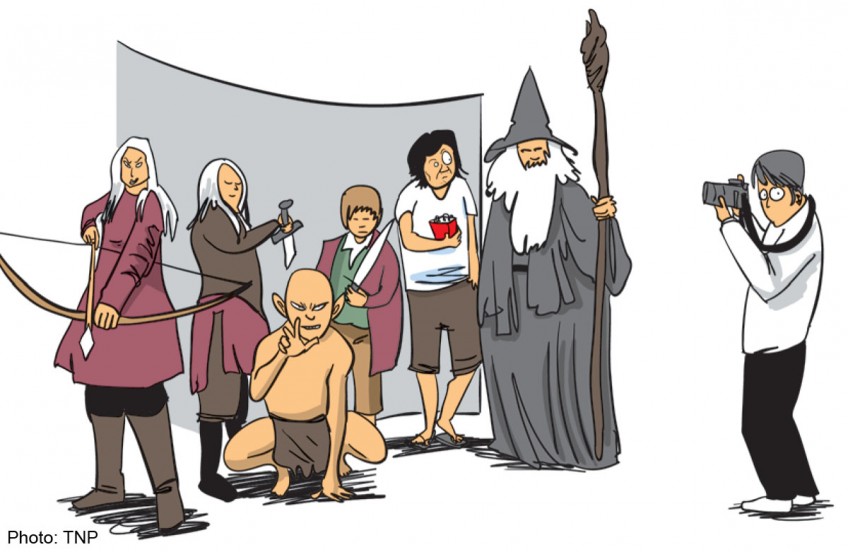 SINGAPORE - And as I approach my CPF drawdown age, it's becoming more unlikely I will ever get to wear a 42.195km finisher T-shirt (unless I buy one on Ebay or Carousell).

So last week, I did the next best thing - I took part in The Hobbit movie trilogy marathon.

I remember watching the first Hobbit movie in the cinema two years ago. It was so long and gruelling, it could be a marathon by itself.

So the prospect of sitting through three bloated Hobbit movies back to back to back in 3D was about as attractive as catching rats in Bukit Batok.

The first movie, An Unexpected Journey, is 169 minutes long. The Desolation Of Smaug is another 161 minutes. The final movie, The Battle Of The Five Armies, is a comparatively fleeting 144 minutes.

That's a total of almost eight hours. I hoped there were toilet breaks.

When I booked the tickets online for me and my 15-year-old daughter two weeks ago, the only seats available in the 602-seat GVmax hall in Golden Village VivoCity were the first three rows.

But my daughter wanted to see The Battle Of The Five Armies as early as possible and we thought paying to watch all three movies was the only way.

It was only after booking the tickets that I discovered there were sneak previews a week before the movie's official Thursday opening. Aiyah!

So on Wednesday, like a fellowship of two, we headed for Vivo, prepared for a long, arduous evening.

The first movie was supposed to start at 5pm. It didn't.

There was a live contest to give away some posters to audience members. After that, we still had to sit through three ads and a couple of movie trailers.

And then An Unexpected Journey began.

I was surprised people guffawed at the jokes like it was the first time they heard them. Even my daughter laughed despite having seen the movie twice before. As for me, I dozed off during the goblin chase sequence.

When the credits rolled, the audience applauded. I wasn't sure if they were applauding the movie or themselves for making through it.

I heard someone behind me say: "One movie down, five more hours to go."

Outside the movie hall, my daughter and I collected the "bento" dinner (rice with vegetables, a springroll and some meat resembling chicken) included in the $46 ticket price and ate it at the 7-Eleven next door, where we bought a kiwi-strawberry Slurpee to help wash down the food.

Many others ate their dinner sitting on the floor in the Golden Village lobby.

The second movie was supposed to start at 8.40pm. It didn't.

More posters were given away and the three winners of the costume contest were announced.

After that, it was the same three ads again and a different movie trailer.

And then The Desolation Of Smaug began.

I didn't fall asleep, but now my daughter was yawning.

During the break, we walked around the darkened mall, which was a little eerie since all the shops were closed as it was past 11pm.

The third movie was supposed to start at midnight. You guessed it - it didn't, even though there were no more posters giveaways or costume contest winners. We watched the same three ads for the third time and another movie trailer.

And then The Battle Of The Five Armies began.

This time, the audience applauded at the start of the movie.

Finally! What we were all here for!

It was a good thing I had just watched the first two movies because otherwise, I would've forgotten a few crucial plot points and minor characters, and been confused by the new movie.

But even though the loudest cheers of the night came when the credits rolled for the last time at 2.30am, I found The Battle Of The Five Armies to be the most frustrating of the three Hobbit movies.

Let's just say it's no Return Of The King.

At least when the first two Hobbit movies disappointed, you could tell yourself it would all pay off in the end. But when the last one is a letdown, you realise this is it - you may have just wasted eight hours of your life.

But I didn't feel that way.

Even though the final movie may have literally been an epic fail like LTA's taxi app, The Hobbit marathon was unexpectedly the most enjoyable time I've had in the cinema in a long while.

Partly because the fans in the audience created a sense of community and made it so much fun, but mostly because I got to spend eight hours with one of my favourite people in the world, my daughter.

If only they gave out finisher T-shirts for movie marathons.

This article was first published on December 21, 2014.
Get The New Paper for more stories.