Seungri arrives for questioning over criminal allegations at the Seoul Metropolitan Police Agency.

In the latest twist to South Korea's K-pop sex crime scandal, police in Seoul announced plans on Monday to issue an arrest warrant for singer-songwriter Jung Joon-young over charges of secretly filming and sharing videos of at least 10 women with fellow idols and friends.

Meanwhile, a Seoul policeman has been accused of taking bribes from Seungri, who is currently under investigation for sex abuse, sex trafficking and drugging female customers at his former nightclub Burning Sun.

Local and international K-pop fans have been shocked as the controversy continues to unfold. But for others, these abuses are not a total surprise. They are just shining the spotlight on a wider issue South Korean society has grappled with: toxic masculinity.

Over the past year, high-profile men have been publicly accused of misogyny and sexual violence as part of the #MeToo movement, while tens of thousands of women have taken to the streets in organised protests to denounce hidden-camera sex crimes.

Authorities received more than 6,500 reports of hidden camera crimes since 2017, according to British newspaper The Telegraph. As of last year, Seoul employed up to 8,000 workers to check public toilets for hidden cameras; but such videos are oftentimes taken by former partners and men who know their victims.

"I don't think K-pop has a toxic masculinity problem, I think Korean society does," said Michael Hurt, a sociologist at the University of Seoul. "Korean men have weaponised the camera," he said, adding that victims of such crimes are often threatened with blackmail. South Korean singer Jung Joon-young has been questioned by police on suspicion of illicitly taping and sharing sex videos on social media.Photo: Reuters

Sharing illicit material about women and treating them as pieces of meat or bargaining chips in a game of sexual bragging is common in Korean culture, the sociologist said. "We are experiencing a K-pop version of it [but] it's a Korea-wide problem.

K-pop stars who have been embroiled in sex scandals.Photo: South China Morning Post

The scandals have undoubtedly rocked the K-pop industry - which was worth US$4.7 billion (S$6 billion) in 2017 - and derailed the careers of the male idols involved, most of whom are in their late 20s to early 30s and are at the peak earning stage of their careers.

For example, Seungri has resigned from Big Bang, one of South Korea's biggest idol groups, which saw US$44 million in earnings in 2016. The star, who was reportedly worth 3.6 billion won (US$3.2 million) in 2016, has also been fired from his role as chief executive of Aori Ramen, a ramen franchise he founded. The food chain saw sales drop in the wake of the scandal. 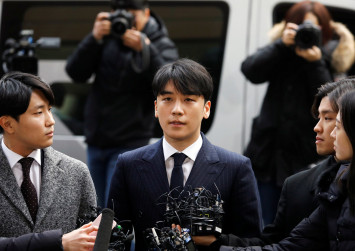 YG Entertainment, which launched Seungri's career with Big Bang over a decade ago and has since severed ties with the star, saw its share price plummet by more than 25 per cent since last week. The firm has also been slapped with a lawsuit by civic groups and stockholders for "lack of ethics and morality", according to local media.

Seungri, Jung, Choi and Yong announced their retirement from the entertainment industry last week, and fans of CNBlue are now calling for Lee to be expelled from his group and management company.

While the scandals have rocked the industry and shocked fans - many of whom are female - Hurt is sceptical that they will abandon their idols or that the industry will really change.

"The scandal won't change the K-pop industry in any way," he said. "It'll affect things by making people more aware or careful, depending on which side of the harasser/harassed fence you sit on."

Ultimately, the current scandal is receiving attention because it affects South Korea's national brand. "As all things in Korea, it brought shame to the Korea people, and it can't be swept under the rug like it would have been if this were the '70s or '80s," Hurt said.

"If this could be ignored or shuffled into a corner in Korea, it would be - but for now, the entire world is watching, which is why heads are rolling immediately."

In previous cases of K-pop abuse scandals, female stars were often shamed while male idols were usually let off the hook, said Jenna Gibson, a long-time K-pop fan and international relations PhD student at the University of Chicago.

"Kim Hyun-joong, a former member of boy band SS501, had multiple scandals in the last few years, including domestic abuse allegations, a paternity dispute, and drink-driving," she said, noting the controversy surrounding Kim from 2014 to 2017.

"And yet, he still gets work in the industry. Beyond the obvious issues with these behaviours themselves, this is one of the biggest issues - men have been getting away with these things for so long that they [don't] even think about consequences."

But the likes of Mano Lee, a Seoul-based K-pop fan and columnist, say male idols won't be forgiven so easily from now on.

"Those who have been following the scene for a long time say that this was meant to happen sooner or later," she said, adding that some observers say they knew the stars had behavioural issues, though not to this extent.

K-pop fans these days are interested in a lot of issues connected to ongoing Korean social movements including human rights, feminism, "escape corset", gender equality, and other issues, Lee said, adding that this gave her some hope.

"As a K-pop fan, critic, and as a feminist, I hope these idols pay for what they have done," she said. "I also hope the industry will improve. It is the right time for big change."