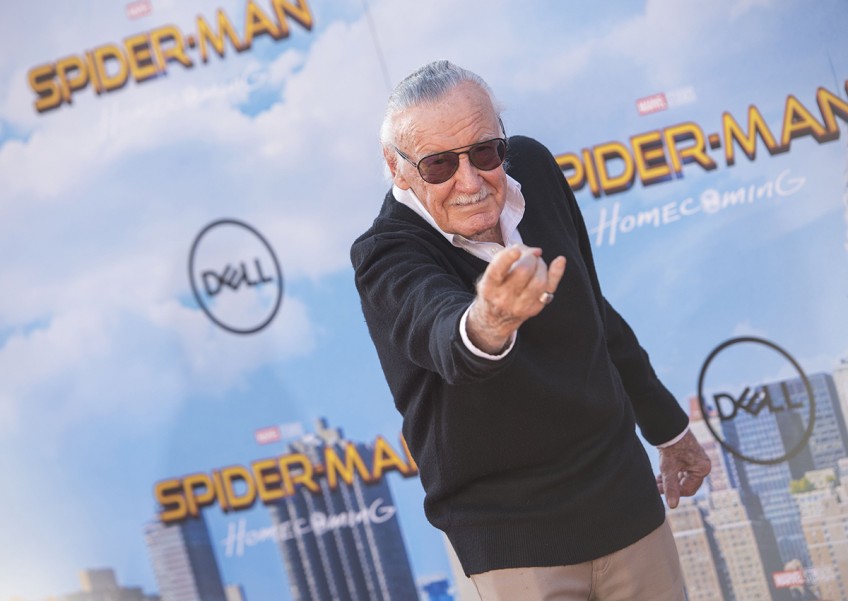 Actors Tom Holland (left) and Jacob Batalon at the red carpet event for Spider-Man: Homecoming held at the ArtScience Museum on 7 June 2017.
The Straits Times

LOS ANGELES - "Spider-Man: Homecoming" sees one of the most successful superheroes in movie history return to his comic book roots - but the film's release is a landmark Hollywood event for a different reason.

The US$175 million (S$242 million) blockbuster brings together two corporate leviathans, Disney-owned Marvel and Sony, in a rare example of co-operation between rival studios on a major film.

"It was one of a handful of 'This will never be possible but let's dream about it' moments at Marvel," the studio's president Kevin Feige, told reporters at the movie's New York press day on Sunday.

Described by Marvel as the "crown jewel" of its comic book empire, the company sold "Spider-Man" to Sony for a reported US$7 million in 1999, when superheroes had not yet become white-hot cinematic properties.

The web-slinger has become Sony's own most prized asset over five movies from 2002-2014 that grossed US$4 billion worldwide, making him the second-most bankable comic book character behind Batman.

But the last of these, "The Amazing Spider-Man 2" (2014), starring Andrew Garfield, was considered a financial and critical disappointment.

Sensing the writing was on the wall, Sony Pictures Entertainment's then co-chairman Amy Pascal agreed in 2015 to allow Marvel Studios - after months of lobbying - to produce a new series of "Spider-Man" movies.

The result, starring 21-year-old Brit Tom Holland ("The Impossible"), is the first Spider-Man movie to exist in Marvel's "cinematic universe," a series of 15 interconnected superhero films.

Featuring Thor, Captain America, the Incredible Hulk and many other comic book favorites, the franchise has hauled in a staggering US$11.8 billion, beginning with 2008's "Iron Man."

Pascal lost her job in the aftermath of the November 2014 Sony hack but was allowed as part of her severance package to stay on as a co-producer along with Feige of "Spider-Man: Homecoming."

The collaboration saw Sony paying Marvel an undisclosed producing fee, according to The Los Angeles Times, but keeping the profits and benefiting from being able to include fan favourite Iron Man in its movie.

Sony is returning the compliment by allowing Spider-Man to appear in Marvel's upcoming "Avengers: Infinity War," after a cameo in "Captain America: Civil War," which amassed US$1.2 billion in box office sales last year.

"It started with a lunch between me and Kevin, and I can't believe we're here now. It's pretty exciting," Pascal told the New York news conference.

There are precedents for such collaboration. Paramount has worked with Warner Bros. on several movies, including "Interstellar," "Friday the 13th" and "Watchmen," with one distributing internationally and the other domestically.

Paramount also came on board with Fox when the budget for James Cameron's "Titanic" (1997) began to spiral out of control, but such arrangements are the rare exception rather than the rule.

His attempts to fall back into his daily routine are disrupted by the Vulture (Michael Keaton), a new villain who threatens everything that Peter holds most dear.

Marvel's vision has been to return Spider-Man to the character of its 1960s comics created by Stan Lee and Steve Ditko - a teenage boy setting the world to rights alongside the Avengers.

"Homecoming" is getting rave reviews from the previews and looks like it will be a hit with fans, creating more social media buzz than any other upcoming release and tracking to open as high as US$100 million on July 7.

"The opportunity to finally put Spider-Man where he belongs, in the Marvel universe, really if anything just opened up the doors to so many new kinds of stories that we could tell," director Jon Watts told reporters.

"So if anything, I felt like we were being as true as possible, as anyone has ever been able to be, about Spider-Man and how he fits into this world." ft/sst/dw .