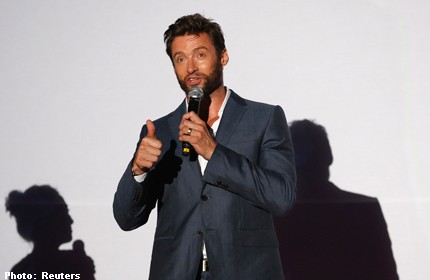 <p>Actor Hugh Jackman speaks to fans during a red carpet event to promote his new movie "The Wolverine" at the Coex Convention and Exhibition Center in Seoul July 15, 2013.</p>

SEOUL - Following his visit to Seoul last year to promote "Les Miserables," Australian actor Hugh Jackman made his fourth visit to the city, this time with the sixth instalment in the X-Men Film series, "The Wolverine."

The actor, who made his first visit to Seoul in 2006 and his second in 2009, was appointed a goodwill ambassador for Seoul in 2009.

"Actually, Korea is the only place in the world I can go out for dinner and it is still on my Wolverine diet - that's Korean barbecue," the actor, who said he takes his job as the goodwill ambassador for Seoul "very seriously," told reporters during a press conference in Seoul on Monday.

"As a nation, you should be the strongest superheroes in the world."

In the upcoming film, Jackman is returning as Wolverine, a member of the X-Men. Directed by James Mangold, the latest chapter of the X-Men franchise is set in Japan and explores the background of Wolverine, as well as his tragic romance with his love interest, the late Jean Grey.

In the film, Wolverine struggles to cope with his immortality, after realizing everyone he loves eventually dies.

"I must admit that all along, what was most interesting about Wolverine's character was not just his superhero strengths - the claws, the healing ability - but also the human side of him," Jackman told reporters.

"It's a very human quality that really makes him formidable, and that's his preserved rage. This idea that what fuels him is actually very human and what causes that is out of pain and loss, loneliness, and the burden of being who he is for the past 200 years. And so I love that conflict within him, and I love being able to explore this."

Jackman, who made his first appearance as Wolverine in 2000 in "X-Men," commented that fans of Wolverine who are "very honest and blunt" with him about what they like and don't like are excited for the movie as "it's the closest depiction of the character" to the original comic series.

"This character is in the first American movie I ever made, it is the foundation of the great opportunities that I've had in the past 13 years - not only with this character but others," he said. "I am very, very grateful for the part."

Playing the adamantium-clawed mutant hero required the actor to get used to the claws. "I'm a lot better with the claws now," the actor said. "The original pair was in fact real metal, they were razor sharp, and I stabbed myself several times, I stabbed the double for Mystique, and after I stabbed her I was mortified."

The claws also made him go through some "serious" security checks at the airport. "I've taken the claws home, most famously at the end of X-Men 2, when I put them in my hand luggage and forgot about it," he said.

"I then went to the airport and was stopped by the airport security officials who had never heard of the series, and when he calmly asked why I had 6 knives in my bag, I said 'Oh, yes, of course, they're just my claws!' I think he thought I was a little crazy and I had to go to the backroom for some serious explanation."

Jackman, who also serves as a producer for the film, described a bullet train sequence in the film as "must see."

"It's a good emblem for the movie because while it's spectacular, it just feels very real, very visceral, and intense."

The actor, who said he enjoyed Korean film "The Thieves" on the plane to Seoul, said his children loved the gifts he brought them from his last visit to Korea.

"My daughter loves the Korean dress, the traditional Korean dress, and my son has the Korean flag still in his bedroom which I am sure will make you happy," he said. "So I have to go out and get some more gifts for them. And also for my wife, of course, because as we say in my country, 'happy wife, happy life.'"

"The Wolverine" opens in theatres in Korea on July 25.