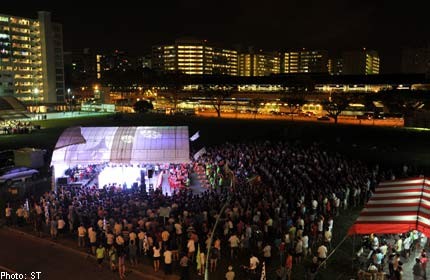 A getai stage in Yishun Avenue 2 and the crowd watching the performance at a field opposite Khatib MRT.

SINGAPORE - In a sea of singlets, shorts and slippers, 75-year-old Koh Hock Son stands out.

He has shown up for a getai performance at a Hougang Avenue 3 void deck in a flowered long-sleeved shirt, sunglasses and a fedora - even though he lives just upstairs.

"I like getai. I like the old songs," he replies easily when asked why he is all dressed up.

Mr Koh says that he goes to all the performances in his neighbourhood, and has been watching getai for at least 50 years.

Over at another getai in Ang Mo Kio, Miss Rei Wong stands out for a different reason. Just 19 years old, she is one of the few young faces in a crowd of mostly senior citizens.

"I came for Hao Hao," she admits bashfully, referring to the Taiwanese getai celebrity. "I love his costumes, his songs and his funny hosting style."

The Singapore Polytechnic student saw her first getai with her parents when she was just four, but has since developed her own passion for it.

She even has getai kakis - a group of "aunties" with whom she goes to these shows. "I asked my own friends to come but they think it's boring."

Getai, which means "song stage" in Chinese, refers to variety performances which entertain both the living and the dead. They are usually staged during the Hungry Ghost Festival in the seventh lunar month.

They used to be year-round affairs. Between the 1950s and 1970s, amusement centres Great World, New World and Gay World - the hubs of the Chinese entertainment scene - hosted at least 44 getai companies.

But some things do not change, like how the front row of seats is still left empty for returning spirits. And many business owners continue to believe in the good luck a getai brings.

Mr Tony Ong, a 55-year-old hawker, and his friends pool together about $8,000 each year to throw a getai celebration for some 200 people, complete with songs, beer and joss sticks.

"We do this for the gods and pray for business to be better," says the Taoist.

But some things do change, as organisers try to keep the tradition alive and win over a younger audience.

Getais today often rely on LED lighting and screens to give them that extra oomph. Traditional dialect songs now share the limelight with techno renditions of Mandarin and English pop tunes.

"Getai is very different now," says Mr Aaron Tan of Lex(s) Entertainment Productions, who has been organising getais for 12 years.

"You have to worry about stage design and the lighting on top of the performers."

A growing number of them are young teenagers, such as 19-year-old Oh Siew Huey, who come from Malaysia and China to earn extra money.

Although the Malaysian, who studies at a local polytechnic, has been performing in getai since the age of 16, this is the first year that she is touring the local scene.

Ms Oh earns about $100 every show for singing three songs.

The audience appreciates having youth on stage. "We try to invite younger performers who sing songs that are faster or more popular," says Mr Ong Yew Bock of Hao Yun Getai, a getai company.

But as getais become more risque, regulations have been more strictly enforced.

In 2009, singer-host Hao Hao was called up by police for dressing up as Marilyn Monroe.

Earlier this month, Lianhe Wanbao reported that several getai organisers were refused licences to set up shows in certain locations, including Geylang Lorong 18.

Rules say that performers cannot use "vulgar or obscene" language, cross-dress or be "indecently attired".

"There are just so many restrictions now it's hard to put up shows," says Madam Sow, who was fined $1,000 for allowing cross-dressing on her show three years ago.

But that has not stopped getais from regaining some of their popularity outside of the Hungry Ghost Festival in the past decade.

"In the past, performances used to be mostly during the seventh (lunar) month," says 43-year-old Mr Ong, who has been in the business for 10 years.

He adds that the number of young people attending his getai concerts has increased by 10 to 20 per cent over the years.

However, popularity does not necessarily equal profit.

Mr Ong says that it is harder to earn money because more competitors are entering the market. There can be as many as 40 getai shows over one Hungry Ghost weekend.

"Everyone's share of the pie gets smaller," he explains.

But organiser Aaron Tan sees a silver lining. "I'm here to preserve getai as a culture, so the more the merrier," he says. "That way the culture won't die."

Indeed, for many in the scene, the key is to keep getai alive. But not at the expense of losing its soul.

"Getai grew up with Singapore," says veteran singer-host Liu Ling Ling, 50. "The new songs are festive, yes, but they are also less meaningful. It's the older songs that can rekindle many memories."

Every year when the Hungry Ghost Festival comes around, Soo Niu Niu travels from her home town in Johor Baru to Singapore, where she stays with her aunt and uncle.

But she is not here to visit her relatives. Every night, she goes to work by performing at getai shows around the island.

And though she may be only 18, the petite teenager sings and dances like a seasoned professional.

She has been singing for audiences since she was 11. She began performing in Singapore four years ago because it is more lucrative.

Sometimes she earns extra by getting hongbao, or red packets. While these usually amount to $10 or $20, she once received one that contained $100.

"I was so surprised. They must have really liked me," said Niu Niu, who has just finished secondary school and intends to become a full-time singer.

Travelling to as many as four shows every night, she finds it stressful sometimes. "I'm always afraid of being late," she said.

Her family has been nothing but supportive, with her father, a former tailor, designing some of her costumes, and her uncle and aunt taking her to gigs from Jurong to Woodlands.

"I'm very thankful to them of course. As long as I can perform, I'm happy," she said