Zhang Ziyi in a scene from Crouching Tiger, Hidden Dragon

The martial arts scenes in Crouching Tiger, Hidden Dragon, which include a gravity-defying fight in the treetops, a surreal rooftop chase, and a vicious battle between the two female protagonists, are some of the best to be performed in a wuxia movie.

That would seem unsurprising, as they were choreographed by Hong Kong maestro Yuen Woo-ping to an overall scheme designed by director Ang Lee .

But in spite of the talent involved, the success of the martial arts was never certain, as two of the three stars, Chow Yun Fat and Zhang Ziyi, had no training in martial arts, and even director Lee had no experience shooting the genre.

Although Michelle Yeoh , the film’s third star, was a seasoned martial arts performer, she injured herself at the start of the shoot, further complicating the production.

Read what the filmmakers and stars said about filming the action scenes below.

Ang Lee on his approach to wire work: “ People fly in this movie, but I ask for real emotion from them. I may have underestimated the power of gravity: it’s tough on actors. Usually an actor doesn’t do that many stunts, and the stuntman doesn’t do that much acting. In this movie, they have to do both.”

Zhang Ziyi, who plays the rebellious Jen, talking to the Post’s Winnie Chung about her first experiences with wire work: “The first few days were terrible. I was so nauseous and pale, and felt like crying. But Chow Yun Fat told me that it was worse for him as he was so much older than me. After that, I started enjoying the freedom of being up so high in the air.

“[My parents] visited the set on the day that I had the most dangerous action scenes. In one scene, I gave out a cry and I landed on the ground, and my mother was already yelling ‘stop’ before the director said ‘cut’. She was in tears afterwards, and said she had never realised that making films could be so dangerous. After that, they didn’t dare visit me on set any more!” 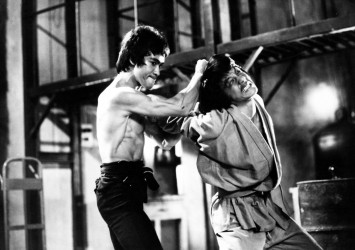 Yuen Woo Ping on training Zhang Ziyi, in conversation with Roger Garcia and Martha Burr: “I found a trainer from mainland China to train Michelle Yeoh and Zhang Ziyi together, from the Chinese wushu team. They trained in weapons, among other things. Michelle was very smart, she learned things very quickly. I asked Zhang to do a few things like kicks, she is very good, even though I don’t think she had done martial arts before. She didn’t complain, even when some scenes were painful.”

Michelle Yeoh, who plays the fading swordswoman Yu, talking about Chow Yun Fat’s lack of experience in martial arts to Indiewire: “[Chow Yun Fat] practised so hard, and from the movie, you can see that. Ang Lee was very clever, because he makes him fight in such a way that it is about his personality. He doesn’t fight like Jet Li Lianjie … you need years of training to be able to do that … he keeps the movements abrupt, quick and to the point. That’s all you need.”

Yuen Woo Ping talking about Chow Yun Fat, who plays ageing swordsman Li: “Chow Yun Fat is a good actor, he knew he needed training, so he found someone to train him. I was happy with the way he holds the sword, and he looks good. I trained him myself for about two weeks before shooting.”

Ang Lee on his plan for the martial arts scenes: “I did a lot of vaulting wire work – more than Yuen Woo Ping ever did before. Two of the climactic fights involve two women, but Yuen is famous for real macho combat. And we also went for more elaborate camera movement, lighting, beauty and aesthetics. That’s not what most martial arts films are going after.”

Cheng Peipei on playing a villainous martial artist for the first time: “Ang Lee came to me and asked me if I could play a bad character [Jade Fox]. I’d never played a bad character. We both agreed that no one is good or bad, it’s the situation that you are in that makes you bad.

“Jade Fox didn’t achieve her [martial arts] goals, as she was a woman. She wants to teach Jen, to make her own dream come true. But Jen does not want to follow her, so she is hurt, and becomes evil.”

Ang Lee talking to Scarlet Cheng about shooting the classic bamboo forest sequence, in which Chow and Zhang duel in the treetops: “Yuen Woo Ping doesn’t really like doing wire work, as that’s not his forte. When we moved from Beijing to the bamboo forest, we had to transport cranes [to mount the cameras for swooping shots] through narrow roads.

“When we got there, we learned to shoot the scenes by trial and error, sometimes by using wires, sometimes by building platforms. Most of what we shot in the first three days had to be thrown out, because the actors looked like they were being dangled, not flying.

“In the end, it took us two weeks to shoot that sequence … it was a nightmare. Chow Yun Fat and Zhang Ziyi were suspended by cables. But they had to look as if they were standing, and the wire pullers had to mimic the movement of the branches.”

Cinematographer Peter Pau Tak Hei on removing the wires from the bamboo forest shots: “I supervised 300 wire removals, sky replacements, and the colouring for the entire bamboo sequence on the computer during post-production in Hong Kong. Some of the more difficult shots in the bamboo sequence took two months to complete due to thousands of leaves moving in the background.”