I spent all my savings on website: Eunice Olsen 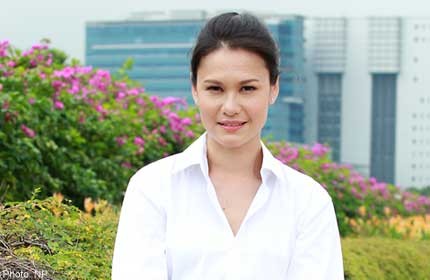 Eunice Olsen has worn many hats - she is Miss Singapore Universe 2000 and a former Nominated Member of Parliament (NMP).

Now, the 35-year-old - who runs a TV- and film-production company - has launched a website to celebrate the social empowerment of women.

The target is to release 24 videos in a year.

She has already interviewed eight Asian women who overcame adversity, including Paralympic swimmer Yip Pin Xiu and a Malaysian rape survivor who started a shelter for rape victims.

My Paper speaks to Olsen on what motivated her to start the self-funded Web series.

What compelled you to start the Web series?

When I hosted a lifestyle programme in September 2011, a woman I interviewed told me how her husband was embarrassed to take her out because she was "big". Only after she lost weight did he take her out.

When I heard that, I was stunned... I thought: "Why don't I do something?" It started with getting women to talk about what they are going through, so they could draw strength from each other.

Who was the most memorable interviewee?

I can't say. It's like being asked to pick your favourite child. They have all inspired me in very different ways.

The Paralympian was memorable because her interview was for the first video, which sparked off everything.

We even conducted one interview (with a Thai elephant-welfare advocate) under an elephant.

How will you ensure the Web series is sustainable?

This is a social enterprise. It is still a business with a strong social message. It monetises through digital advertising: digital banners and pre-roll on videos.

My entire life savings have pretty much gone into this. There's nothing to be afraid of. If I fail, so be it.

What lessons did you learn, as an NMP, that you can apply today?

I learnt a lot more about Singapore and the amazing people who do work on the ground, such as those in voluntary welfare organisations.

I learnt a lot from being in Parliament. Politicians should never be on a pedestal. They are there to serve the people... It's the duty of politicians to find out what the people need.

As a parliamentarian, you are like a middleman: You need to be a voice for people who don't have one.

What have you been busy with since ending your NMP stint in 2009?

I'm still acting and hosting. In 2011, I started House of Ou Studios, a production company. We have embarked on three projects, including WomenTalk and two other films.

A feature film called 3.50, which revolves around sex trafficking in Cambodia, premieres here in October.

What does empowerment mean to you?

Empowerment for me is having the courage to take on what you believe in, to stand up and speak for it, to have the tenacity to see it through, and to be fearless of failure.