I went a little crazy during filming 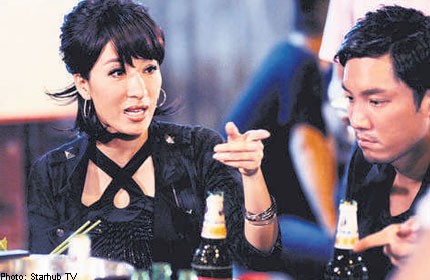 <p>Challenging Role: Tavia Yeung got nightmares from playing a schizophrenic serial killer in A Great Way To Care II. She got over it by talking to her fellow actors and cracking jokes.</p>

But in real life, the chirpy 33-year-old is a softie who got nightmares from getting too involved in her role.

Speaking to reporters while filming her new period drama, Property Protector, the award-winning Hong Kong actress said she is interested in heading overseas, be it the lucrative mainland-China market, or even Singapore or Malaysia. She is also keen to star in a film on the silver screen if time permits.

How did playing the role of a mentally-ill person affect your own well-being?

I found that I also went a little crazy. When I went home after filming, I couldn't sleep well because I was too immersed in the role.

Even when I dreamt, I'd have nightmares of me killing people. The mental stress was quite high, because my character has a lot of jumps in personality. One moment she is normal, and the next she is crazy.

During that time, I was feeling quite down. Luckily, that wasn't too big a problem to handle. I'm quite a jovial person, so I can let it go quite quickly.

Also, those actors playing my fellow cops are my good friends, so talking to them after filming and cracking jokes helped me forget.

Do you find this role your most villainous one to date?

Actually, I don't think she is evil. It's because she has a mental illness.

I think my concubine character, Yiu Kam Ling, in (2009 costume drama) Beyond The Realm Of Conscience, has a more evil side.

I think everyone faces instability in their emotions. If that isn't treated well, or if you are afraid of facing them, then problems will emerge. This show is good because it highlights the plight of people suffering from schizophrenia.

Is your contract with TVB up? What conditions would you set if you were to renew it?

My contract is still not finished, we are still working out the details and discussing it. I would want to ask them for more time to sleep and bathe, otherwise I'd scare away all the guys around me.

Your boyfriend, actor Him Law (who, at 28, is five years younger) recently said he hopes to get married by 35. Are you willing to wait that long?

The ideal age to get married is different for everyone. He says he wants to get married then, but who knows, I mighty want to get married at 40. We prefer to let nature take its course, with our careers as the priority. So maybe I'll have to ask my partner whether he can wait (laughs).

If I do get married, I'll let you know. I would love for the media to congratulate me.

A lot of stars are quite active on social media. Do you place any restrictions on yourself when uploading content?

I actually don't have a Facebook account, so I want to tell people not to be cheated.

But the stuff on my Weibo is real and from me. Still, I wouldn't post without thinking. It'd mostly be photos of me working, or day-to-day happenings that allow people to know my current situation.

Catch Tavia Yeung on A Great Way To Care II on VV Drama (StarHub TV Ch 855) at 9pm on weeknights.