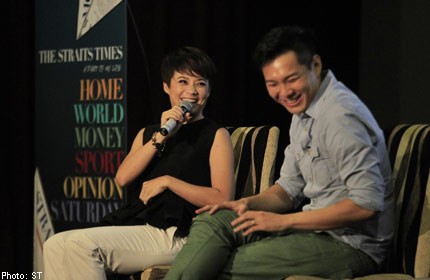 It also received glowing praise from Chen's countrymen when it had its first public screening here on Thursday for more than 200 Straits Times readers.

Among the audience was advertising manager Lester Lee, 25, who said he felt very emotional after watching the film, which won the prestigious Camera d'Or at Cannes for best debut feature.

He said: "There are so many things that are familiar and close to my heart. I grew up in the same period and I had two maids then."

The film examines the relationships within a Chinese Singaporean family of three and with their maid Teresa, who is from the Philippines.

Set against the backdrop of the 1997 Asian financial crisis, the film focuses on the strained relationships that lie at the heart of the family.

Human resource manager Julie Tan, 45, said: "It was a very enjoyable film; it wasn't like your typical Hollywood movie. There were many things in the show I could identify with."

The 29-year-old director of the film took part in a 20-minute dialogue session with the audience after the screening.

The tickets to the screening were given out in a lucky draw as part of The Straits Times Appreciates Readers (Star) programme.