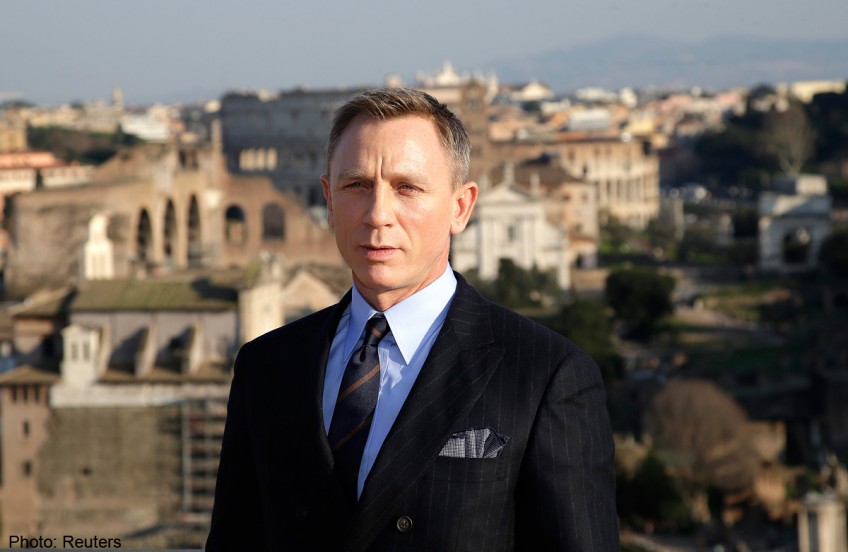 MEXICO CITY - Mexico has plenty of murderous and eccentric drug lords, but its image-conscious government did not want the new James Bond film "Spectre" to feature a Mexican villain when 007 comes blazing into town.

Bond producer Michael Wilson acknowledged Wednesday that local authorities were concerned about seeing a Mexican cast as the bad guy when the movie starring Daniel Craig is shot in the country.

But he denied reports that the script was changed at the request of executives from Sony Pictures and MGM Studios, eager to save money after the government offered $14 million (S$19.4 million) in tax incentives in return for a better image.

The website taxanalysts.com, citing leaked Sony emails, reported that the changes included that an international leader should be assassinated instead of Mexico City's mayor, and that Bond's nemesis should not be Mexican.

"I think we never had the villain as Mexican so it wasn't something we had to change," Wilson said, acknowledging that it was among "some of the issues" authorities had raised.

"The villain was always an Italian." The government provided technical support, like getting permits to shoot in certain locations or advising on things such as which security force would be involved in certain situations, he said.

"It's more like us asking questions and then discussing it with (Mexican authorities) than them demanding anything in the way of changing" the screenplay, he said.

"I know they want to see, they would love to see Mexico in a good light and we are not here to put Mexico in a bad light," Wilson said, refusing to confirm how much the government offered in tax incentives.

Wilson said a Mexican joint venture that was formed to support tourism helped film-makers secure "financial and practical support," but he did not elaborate.

President Enrique Pena Nieto, who took office in December 2012, has sought to turn his country's image around, emphasizing his internationally acclaimed economic reforms over the relentless drug war.

But his administration has faced an international image crisis since the disappearance and presumed massacre of 43 college students last year, a slaying that has highlighted the struggle to contain crime and corruption.

Stephanie Sigman, the first "Bond Girl" from Mexico, said she was never worried about how her country would be depicted in the film, which will premiere November 6.

"I have made all kinds of movies, which look at good and bad sides, and I think there are many layers in countries, situations and including in us as human beings," she said.

"So, no, I never worried about that." Wilson said producers always planned to have a Mexican Bond girl, denying reports that it was one of the government's demands.

Day of the Dead

Mexico City has been buzzing with excitement about hosting the latest Bond movie, which will include scenes shot at the old Senate building in the historic centre and the sprawling Zocalo square facing the ornate National Palace.

The opening sequence of the film will take place during Day of the Dead, a holiday during which Mexicans pay respect to deceased relatives, decorating altars with skeletons and marigolds.

Wilson said 1,500 extras will take part in the opening scene and 80 make-up and hair artists have been mobilized. Streets in the historic centre will shut down for filming on Thursday, with closures planned until the end of March.

"We are not here to tell a political story. There's plenty of filmmakers who do political stories, and my hat goes off to them, they are great filmmakers. But we are strictly entertainment people."