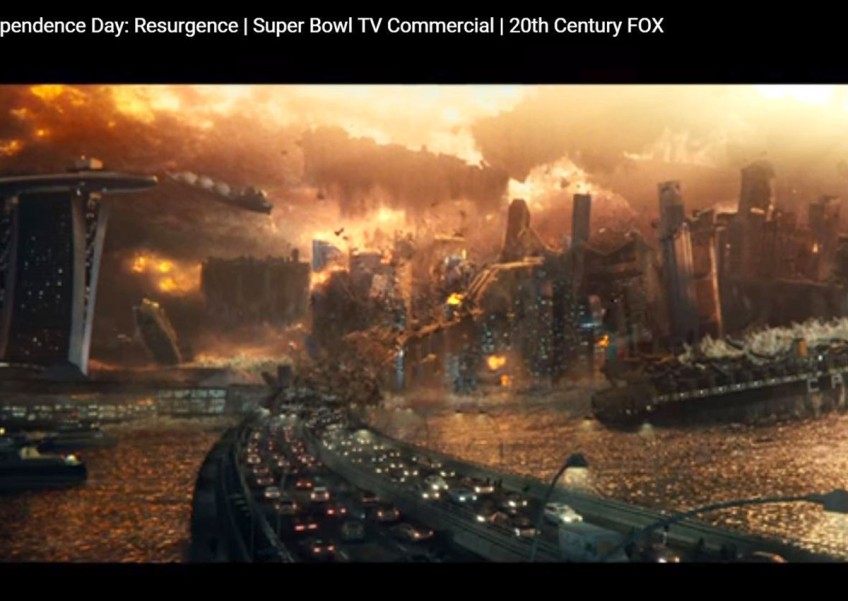 The Little Red Dot gets erased in Emmerich's sequel, which lacks the heartfelt moments and build-up of the first movie.
20th Century Fox

The sequel to the 1996 alien-invasion smash is here, arriving in a very different film landscape. Can a blockbuster from the '90s reinvent itself for 2016?

"What I miss is original movies," says director Roland Emmerich. "It always has to be a franchise [today], it has to have a superhero name in front of it. It can be discouraging to make big movies [today]."

That may seem a surprising statement from the director of Independence Day: Resurgence, the sequel to the 1996 blockbuster about humanity's valiant struggle against an alien invasion.

But Emmerich and 20th Century Fox did wait 20 years before releasing a sequel - a staggeringly long time in Hollywood, considering that the original film grossed over $800 million (£272 million) worldwide.

And they waited because Emmerich wanted to tell a different kind of story.

The original film showed how an extinction-level threat to all of humanity, such as an invasion of bloodthirsty extra-terrestrials, might cause people to put aside their national, ethnic, racial and religious differences to work together for survival.

But it was rooted in the real world.

Resurgence imagines an alternate reality, in which The War of '96 caused history to diverge dramatically from our own.

That unity of humanity against a shared threat has lasted and resulted in technological advances far surpassing those of our world.

Humanity suspects the aliens may return - and this time, they're ready.

Blockbuster film-making has changed drastically in the 20 years since the original film, which relied on practical effects and model work for some of its most dazzling moments.

Now, nearly all blockbusters, including Independence Day: Resurgence, are drenched in computer-generated images.

The idea of an iconic landmark such as the Empire State Building being destroyed, as it was in the first film, is fraught with a greater sense of tragedy following the attacks of 11 September 2001.