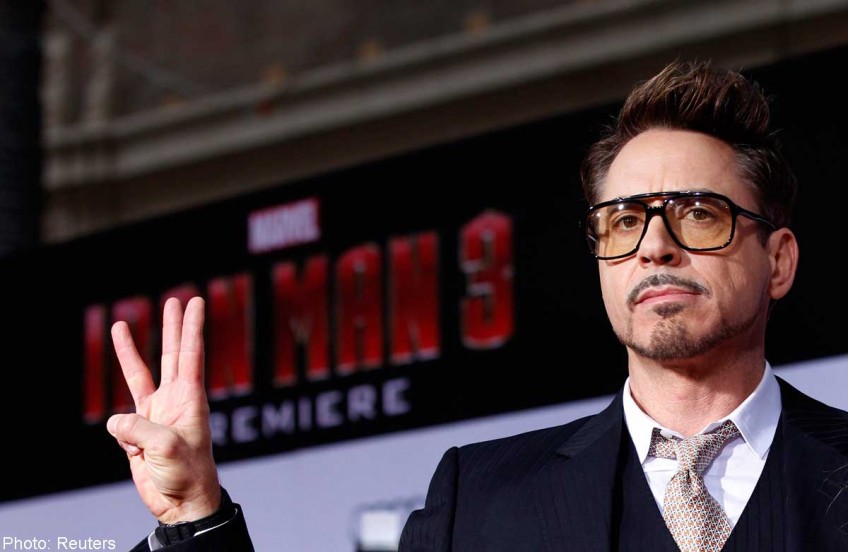 The 49-year-old star made most of his money from June 2013 to June 2014 from "Iron Man 3," which made US$1.2 billion at the box office and assured him the top spot again in the annual ranking. "As Iron Man, he's the driving force behind four of Marvel's biggest hits, including 'The Avengers,'" Forbes.com said.

Former wrestler Dwayne "The Rock" Johnson, 42, who starred in "G.I. Joe: Retaliation," and the "Fast and Furious," films, jumped into second place this year from fifth in 2013 with earnings of US$52 million, followed by "Hangover," star Bradley Cooper, 39, with US$46 million. "His work in the lucrative 'Hangover,' franchise has given him the ability to take risks with smaller films like 'Silver Linings Playbook,' and 'American Hustle,'" Forbes said about Cooper. "The Wolf of Wall Street," star Leonardo DiCaprio, 39, had a lucrative year with two hit films and came in fourth at US$39 million in earnings, while Australian "Thor" actor Chris Hemsworth, rounded out the top five with US$37 million.

DiCaprio was a driving force behind "The Wolf of Wall Street," which made US$395 million worldwide and he also starred in "The Great Gatsby," which took in US$351 million globally.

Mark Wahlberg, 43, who was in fourth place last year thanks to the comedy hit "Ted," just made the top 10 this year along with actor Will Smith, 45. Each actor earned an estimated $32 million.

Forbes.com compiled the rankings and estimated earnings by talking to managers, producers and agents.