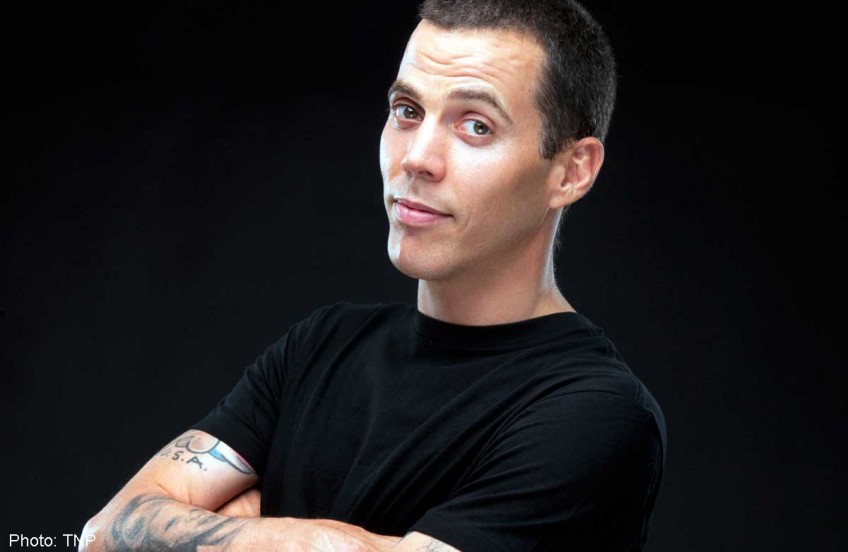 LIKE a true reality TV star, Steve-O has no qualms embracing his narcissistic, publicity-craving side.

Not surprising given that he shot to fame in the early 2000s as a member of MTV's hugely popular stunt series Jackass.

But the 40-year-old London-born, Los Angeles-based comedian tells M in an e-mail interview that he is definitely more of an "attention-seeker" than a daredevil.

"Doing funny and crazy stunts was the best way for me to get the most attention," he said.

Whether you view him as the epitome of physical comedy or the bane of decency on TV, there is no denying that Steve-O and his fellow Jackass pranksters, including Johnny Knoxville and Bam Margera, were big-time risk takers.

DON'T TRY THIS AT HOME

"The most dangerous stunts I did happened when I was working with big cats (such as lions, tigers, jaguars), bears, sharks, venomous reptiles and other animals that can easily kill people," he recalled.

"The other stunts I remember being the craziest were jumping out of an aeroplane with no parachute into the ocean, and injecting five ounces of vodka into my arm through an (intravenous) drip."

Both of which we would like to remind readers not to try for themselves.

Jackass was such a hit that it spawned seven movies, the latest being last October's Jackass Presents: Bad Grandpa.

He will be sharing more misadventures from his wild Jackass days in his stand-up comedy show here on Aug 10.

While Steve-O clearly relishes the attention poured upon his outrageous onscreen persona, he acknowledged that there were dissenting voices from concerned parents who saw the show as a negative influence.

The show has been targeted as the influence in many cases of stunts-gone-wrong.

In 2002, a 15-year-old in Albuquerque, in the US state of New Mexico, attempted to hold on to a moving pick-up truck - a stunt inspired by Jackass - but was thrown from the vehicle. He died of head injuries.

In April this year, a man in Adelaide shot his friend in the arm with an air rifle, while reportedly trying to emulate a scene from the show.

"I'm actually producing a documentary about this topic," Steve-O shared.

"I recognise that Jackass has been an influence on our (mainstream pop) culture and it inspired some tragic events.

"The purpose of my documentary will be to explore that influence and whether or not I have been wrong to do what I've done."

Although it has been a smooth transition from reality TV to stand-up, Steve-O does not take audience support for granted, saying that if you are not a good comedian, "fans will stop coming".

He said: "What makes me different from other performers is the extraordinary life I've lived and how completely honest I'm willing to be about it.

"When I tell stories and jokes, not only are they shocking and hilarious, you can be completely sure they are 100 per cent true."

FYI WHAT: STEVE-O THE GUILTY AS CHARGED TOUR