Remember Jesse Jane McParland, the little girl who burst onto the scene with her awesome martial arts display as a nine-year-old on Britain's Got Talent?

McParland is now 13 and she has continued to thrill millions of fans around the world.

She has even impressed Hong Kong martial arts hero Jackie Chan, who can now be counted as one of her admirers.

Chan sent her a video message on stage and gave her a box of gifts while she was competing in the World's Got Talent television show in Hunan, China recently.

Hailing from Co Armagh in Ireland, the teenager has made it big on the show, reaching the semi-finals after impressing judges with her all-round martial arts skills.

"They took all the finalists from Britain's Got Talent, America's Got Talent, all the 'Got Talent' shows, and they all competed against each other," McParland told ITV.com.

Chan has probably been following McParland since the teenager became a star on Britain's Got Talent in 2015.

And the 65-year-old Hollywood star of Rush Hour and The Foreigner made sure McParland got a little inspiration from him.

He gifted her a copy of one of his books, signed with the words: "Dear Jessie, Never Give Up, Love U, Jackie Chan."

McParland said the competition was very tough in Hunan but that Chan's inspirational words lifted her spirits. 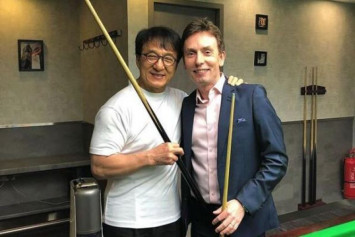 "It was really, really tough, I got a message from Jackie Chan which just made my day - I was just star struck. He's my idol, I think he's just amazing."

According to ITV.com, McParland has never lost her world championship crown in the prestigious Wako kick-boxing competition and now she's setting her sights on winning Olympic gold.

She said: "Hopefully one day I'll be in the Olympics and I really want to be in a movie with Jackie Chan, that's my dream."