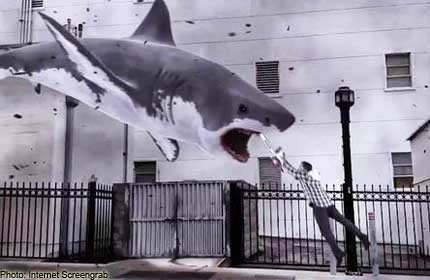 UNITED STATES - To whet your appetite, we have five most ludicrously improbable scenes from Sharknado. Spoilers, you say? That's only if the story made any sense in the first place.

1) After a semi-irrelevant opening 15 minutes, the action really begins. Waves storm a Los Angeles beach, bringing with it sharks. One, which falls through the roof of a beach bar, is swiftly killed by pretty bartender Nova (Cassie Scerbo) with a pool cue, probably the only one in the world with a sharp end.

2) After Fin (Ian Ziering), Nova and team find Fin's wife and daughter (Tara Reid and Aubrey Peeples), they encounter sharks popping up out of manholes. In addition to being handy with a pool cue, Nova is also apparently great with a rifle - she's on target with every shot.

3) The group reach an airplane hangar that has a ton of chainsaws in storage, and so decide this is their best form of defence. Fin proves this to be true when, in the face of an oncoming shark falling from the sky, he calmly raises his chainsaw in the air and splits it in half.

4) These same people get into helicopters and lob bombs at the sharks from above. While throwing a bomb, Nova falls out of the helicopter she's in and... straight into the mouth of a shark, setting us up for the best scene of the film.

5) This scene goes straight into the "Most Ridiculous Movie Saves Ever" hall of fame. To save Nova, who apparently has not been crunched to death inside the shark, Fin jumps into the mouth of the shark with a chainsaw. When he cuts himself out of the shark, he's carrying Nova, alive but unconscious.