King of mandopop Jay Chou is set to welcome another child into his fold before June 11, Taiwanese media has reported.

Earlier this year on Valentine's Day (Feb 14), the Taiwan-born megastar announced on his Facebook page that he was expecting a baby boy with his wife, model Hannah Quinlivan.

This will be their second child since the birth of their daughter, Hathaway, back in July 2015.

The 38-year old singer married Quinlivan in a lavish “fairy-tale” wedding in Jan 2015 that was estimated to cost a cool $1 million.

Apple Daily Taiwan reported that Quinlivan had her baby shower on June 5, and the heavily pregnant mother-of-one will once again be delivering her baby via cesarean section.

The expectant mother is said to be having a healthy appetite and often invites her friends for afternoon tea where they'll have desserts and dim sum.

However, with regards to the exact time and date of the delivery, Quinlivan’s manager Ken told the Taiwanese paper that they have yet to receive a notice to schedule the surgery, despite the paper reporting the June 11 date. 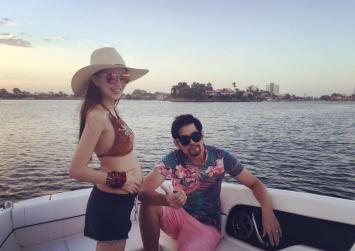