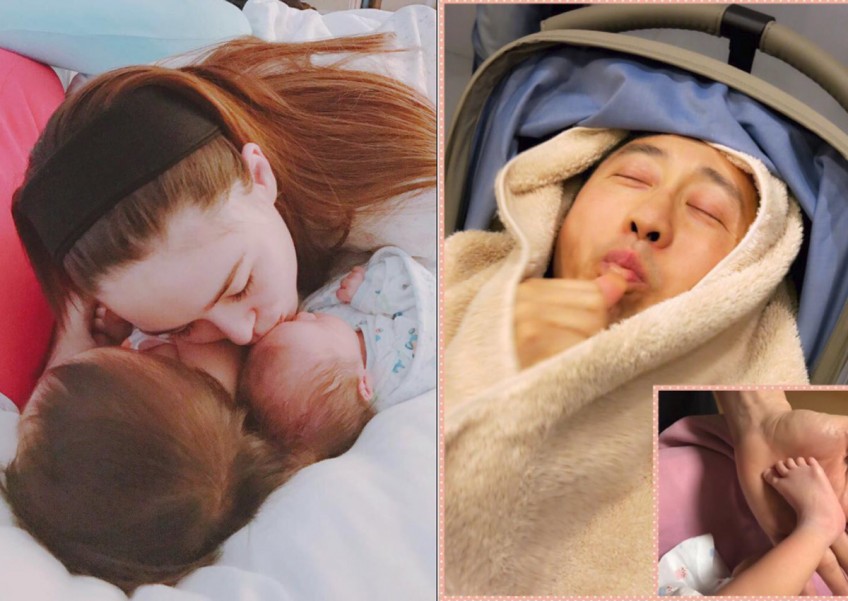 It seems like Taiwanese stars Jay Chou and Harlem Yu had much to celebrate on Father's Day this year.

Through Facebook posts uploaded at almost the same time, the two celebrities heralded the birth of their newborns to an outpouring of heartfelt congratulations from fans.

Sharing a touching photo of his wife, 23-year-old Hannah Quinlivan in bed and embracing their two children, the King of Mandopop confirmed the safe arrival of his infant son.

The 38-year-old megastar wrote in Chinese: "Haha, jie jie's (older sister) song [Lover From A Previous Life] did not get nominated so we will have to rely on mummy's lover from a previous life to fight on her behalf. I probably won't be able to attend the Golden Melody Awards. Thanks to all my fans for their concern. Watching the Golden Melody Awards from the confinement centre with mother and child will feel quite special."

Referencing a Taiwanese saying that a person will have plenty of good fortune before getting married and after having a child, he added, "my chances will be better... Haha, what I meant was, my luck will be better."

Last year, Chou released "Lover from a previous life (前世情人)" in his 14th studio album, a song dedication to his first child, daughter Hathaway who was born in 2015.

Although the song was not nominated at the awards to be held on Saturday (June 24), Chou has been nominated for three other prizes- Best Mandopop Male Singer, Best Music Video (for his song Bedtime Story), and Song Of The Year (for Love Confession).

Swaddled up and sucking on a thumb, the post drew much laughter but the proud father did tease fans with an image of his baby's foot, cooing over how small it is. The baby is rumoured to be a girl, but the couple have yet to confirm their child's gender.

This is Yu's second child with current wife, Taiwanese announcer Jinny Chang (42), whom he married in August last year.

The 55-year-old has a 15-year-old son, Harrison Yu, from his first marriage to fellow Taiwanese celebrity Annie Yi.