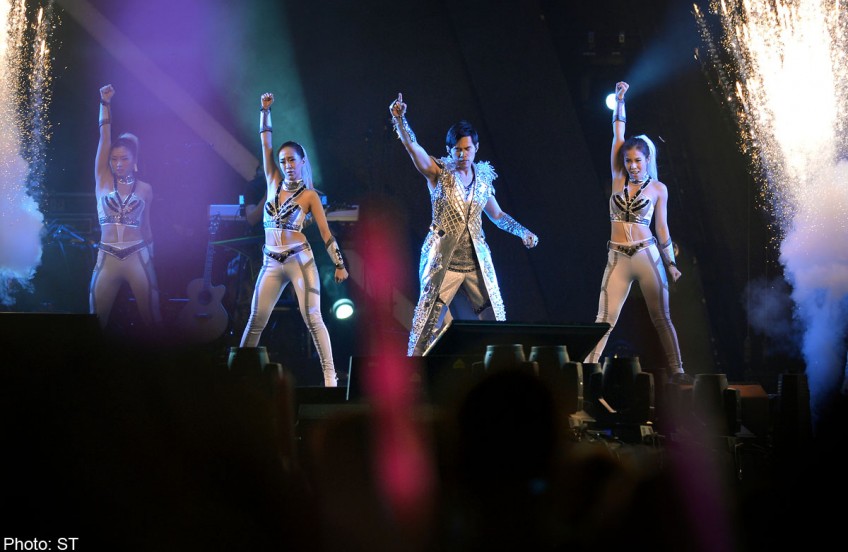 There were few or no complaints about the sound at the National Stadium after concerts by Stefanie Sun and Mariah Carey earlier this year.

Local sound engineers that Life! spoke to say that what is called bad sound can be subjective.

There are usually various factors that lead to fans being unhappy with the quality of the audio at gigs. Among these are the size and shape of the venue, the position of the seats, the engineers twiddling the knobs and the audio equipment used.

Sound engineering veteran Shah Tahir, 56, who has worked on major events such as the National Day Parade, says that the venue and environment are usually the No. 1 cause of poor sound quality at shows.

"The National Stadium has a bowl-shaped, closed environment, so there will be a lot of acoustic problems. In that situation, the type, amount and design of the speakers that you use can counter the problems. You can have the best system in the world, but if it's in a place that is not going to work, then it won't work right."

Chou fan Anne Loh, who has been to all of his past concerts here, tells Life! that the audio last Saturday was the worst she had heard yet.

"The sound was muffled and the bass too overpowering," says Ms Loh, a 41-year-old magazine editor. "Jay sounded bad, but his backing singers sounded worse, sometimes you couldn't hear them at all.

"The sound at his concert at the Singapore Indoor Stadium last year was not perfect, but was much better. I was expecting the National Stadium to have a better sound because it's a new building."

The venue's sound woes come amid other complaints about a leak in the retractable roof of the stadium. On Sunday, The Straits Times had reported that fans posted photos of a big area where there was no shelter inside the venue, which they said was letting rain get into the concert area.

Chou's concert organiser, Multimedia Entertainment, told Life! that it was responsible for the sound engineering at the concert and worked with an external partner for sound and equipment. It declined to reveal to whom it contracted the job.

The company's events director Adeline Low says: "We tested the sound before the concert and found it to be satisfactory."

Multimedia, which organised Chou's three sold-out concerts at the Singapore Indoor Stadium last year, is gathering feedback from fans who went to the show.

Ms Low says: "There have been calls to stage Jay's next concert at the Indoor Stadium. We will consider all factors before deciding on the next venue."

Sound engineer and music producer Leonard Soosay, who has engineered live sound for artists such as Mandopop singer Sun and indie band Electrico, however, says that stadiums have the potential to provide great sound in a concert.

"Look at London's Wembley Stadium. It's not just a sports venue and it's not designed to have the best acoustics, but many concerts with great sound have been held there," says the 48-year-old. "The experts who work on shows there have refined their techniques over the years to optimise the sound of gigs held there."

Not all fans were upset by what they heard at Chou's Saturday show, though. Travel manager Peter Koh, a fan of Chou's for 14 years, says that he was happy with the sound at the gig.

The 42-year-old says: "I wouldn't say the sound was perfect, there was definitely echo in some parts, but overall, I could hear everything and I did not have any problems with the sound."

This article was first published on December 31, 2014.
Get a copy of The Straits Times or go to straitstimes.com for more stories.