Jobs doesn't do justice to the man or Apple 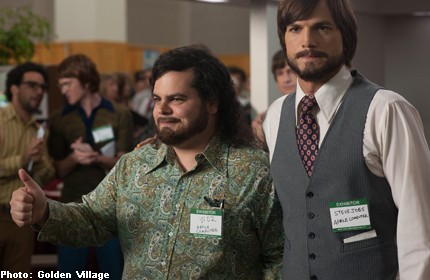 UNEVEN PORTRAYALS: While Josh Gad (left) managed to nail the quiet intelligence of Steve Wozniak in the film, Ashton Kutcher failed to adequately portray the complicated genius of Steve Jobs.

To be able to pull off a biopic takes a certain amount of skill. One needs to walk the fine line between veneration and stooping to sensationalism.

Good biopics are few and far between, and when the subject in question is an iconic figure, the expectations are even higher.

Despite its best efforts, Jobs does not succeed in its portrayal of Steve Jobs as a man or as chief executive of Apple.

Directed by Joshua Michael Stern, Jobs revolves around Steve Jobs (Ashton Kutcher) and the evolution of Apple from a garage start-up to the billion-dollar corporation it is today.

In many ways, this film, in terms of its narrative, scope and characters, could be compared to David Fincher's The Social Network - a semi-fictional account of Mark Zuckerberg and the genesis of Facebook.

What worked in The Social Network's favour was that it never pretended to be a biopic.

That said, even if a biopic is bad, a technically-brilliant portrayal of the subject sometimes negates the film's flaws (see Meryl Streep as Margaret Thatcher in the problematic The Iron Lady).

But credit where credit is due: he tries his best to adequately portray Jobs' internal struggles. It must also be said that Kutcher gets the Jobs gait right.

While I am no Apple aficionado, the film does succeed in terms of its narrow scope, in that it does not attempt to depict the entire history of Apple or Jobs' life-story.

Nevertheless, the film falters with its sitcom-worthy scenarios that highlight Jobs' obsession with precision and perfection.

However, there are certain elements that the film has going for it. The supporting actors in the film are outstanding.

Josh Gad, in particular, manages to nail the quiet intelligence of Steve Wozniak, who is not comfortable with Jobs' change in character in the film.

With wonky wigs and 1970s clothes, the supporting players do not shy away from eccentricity. In fact, the film would have worked better if the screenplay by Matt Whiteley had lifted some focus off Kutcher and made the film an ensemble effort.

As it is, the film does not do justice to the incredible story of the meteoric rise of Apple in the early days to its regression shortly after.

A film that depends too heavily on Kutcher - who does not adequately portray the complicated genius of Jobs - Jobs would have done better as an ensemble piece focusing on the company and not its founder.