Is Johnny Depp's Hollywood career over after lost libel case?

Actor Johnny Depp gestures as he arrives at the High Court in London, Britain, on July 17, 2020.

When the announcement came, it was no surprise. “I wish to let you know that I have been asked to resign by Warner Bros. from my role as Grindelwald in Fantastic Beasts ,” wrote Johnny Depp on Instagram. “I have respected and agreed to that request.”

The J.K. Rowling-scripted franchise, prequels to the Harry Potter series, will have to find a new villain.

It arrived just days after Depp lost his libel case against Rupert Murdoch’s News Group Newspapers, owner of British tabloid The Sun, which published an article in 2018 alleging he was a “wife beater” in reference to his former spouse, actress Amber Heard. Depp and Heard appeared in court in London in July, as lurid stories of Depp’s drinking and drug-taking, and excessive Hollywood lifestyle, went public.

That alone would not be enough to flatten Depp’s career. The 57-year-old actor has always been the Hollywood outsider, the very antithesis to clean-cut A-listers; his friendships have included the late gonzo journalist Hunter S. Thompson, whom he played in Fear and Loathing in Las Vegas , and Rolling Stones guitarist Keith Richards, who inspired his portrayal of Captain Jack Sparrow in the Pirates of the Caribbean franchise.

As Depp’s own doctor said during legal proceedings, the actor “romanticises the drug culture”, although narcotic issues have clearly never been enough to derail a Hollywood career.

Robert Downey Jnr recovered from terrible drug problems to become one of the highest paid actors in the world, thanks to his role as Iron Man in the Marvel franchise . Everybody loves a comeback, especially in Tinseltown.

Yet whether Depp will ever come back from this is not clear. After the news of Depp’s “resignation” from the Fantastic Beasts series went viral, The Sun gleefully ran an article with the headline:

“Wife beater Johnny Depp ‘will never work in Hollywood again’ after being axed from Fantastic Beasts .” Media lawyer Mark Stephens was quoted as saying: “This is devastating for Depp. He is now toxic.”

The judge presiding over the case, Mr Justice Nicol, ruled that 12 of the 14 alleged assaults heard in open court – all of which had been denied by Depp – had been proved on the balance of probability. The content of The Sun ’s article was ruled “substantially true”. Depp called the verdict “surreal” and says he will appeal, though surely the damage has been done. 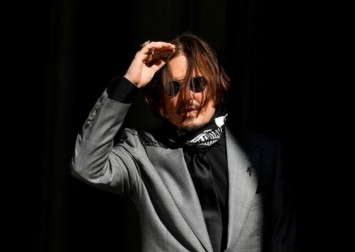 Even before the verdict, a conscious uncoupling was taking place. Jerry Bruckheimer, the mega-producer who turned Depp from cult star to A-list multimillionaire thanks to the Pirates movies, said earlier this year when quizzed about a possible sixth instalment:

“We’re not quite sure what Johnny’s role is going to be. So, we’re going to have to wait and see.” If it was about time Depp and his sozzled swashbuckler parted company anyway, that’s not the point. Hollywood is backing away.

Still, Depp has his supporters – including a hardcore fan base. This week, fans took to Twitter to accuse Warner of double standards and urged the studio to fire Heard from her role in the upcoming DC Comics sequel Aquaman 2 .

Heard has also faced torrents of online abuse, with many choosing to side with Depp, who accused Heard of having “painted-on bruises” when photography of her injuries surfaced.

His celebrity friends also did not desert him. During the libel trial, his former girlfriend and Edward Scissorhands co-star Winona Ryder said in a statement:

“I was absolutely shocked, confused and upset when I heard the accusations against him … the idea that he is an incredibly violent person is the farthest thing from the Johnny I knew and loved.” Actress Helena Bonham Carter, who has known Depp for years, recently added: “None of it makes sense.”

Yet actors do not run Hollywood, and the court of public opinion is increasingly listened to by studio executives, particularly in the wake of the multiple sex scandals that rocked Hollywood and led to the formation of the #MeToo movement.

With Depp’s stardom now tainted, it may be that he beats a retreat to the independent film arena, where he first made his name in movies like John Waters’ Cry-Baby and Jim Jarmusch’s Dead Man.

To some degree, he’s been doing this anyway, with recent films such as Waiting for the Barbarians , with Mark Rylance, and Japan-set drama Minamata , which he also produced.

The latter sees him star as real-life war photographer Eugene Smith – another maverick soul – who documented the corporate covers-ups surrounding the accidental mercury poisoning of Japanese citizens in the 1970s.

The film’s director, Andrew Levitas, is another supporter. “Johnny is the single most giving artist I have ever been around,” Levitas says.

“And Johnny is also somebody who is invested in and dedicated to helping people – and he does it all behind the scenes. Whatever city Johnny’s in, he goes and visits children’s hospitals and sees people, and there’s no cameras, there’s no fanfare.

''He’s someone who is incredibly engaged in the world behind the scenes. He cares, he really cares.”

All of which may well be true, but it becomes impossible to reconcile this softer, generous side of his personality with the out-of-control behaviour catalogued in court – multiple incidents where Heard alleged Depp was violent towards her.

After one stimulant-fuelled night, when he tried to set fire to a painting by Heard’s former lover, she described him as “Dr Jekyll and Mr Hyde – on a binge”.

Oddly, it’s a description which recalls Mel Gibson, who similarly had issues in the past with alcohol. The star of Mad Max was infamously charged with drink-driving in Malibu, muttering ugly anti-Semitic comments at the arresting officer.

In a separate incident, a racist telephone rant to his ex-girlfriend Oksana Grigorieva further scandalised him. Somehow, Gibson is still working in Hollywood, though he’s nowhere near the level he was at in the 1990s.

The same is likely to happen to Depp, although the accusation of “wife beater” will hang around his neck like a millstone.

He will undoubtedly lose more roles – just as Gibson did when the crew of 2011’s comedy sequel The Hangover 2 protested against his casting in a cameo role as a tattoo artist. Hollywood is far less tolerant – thank god – than it used to be and mud, particularly when it’s this ugly, tends to stick.

In the end, Depp’s decision to fight an article he believed was libellous has backfired spectacularly. Nor will it end here, with the actor entwined in a defamation case against The Washington Post and Heard for an op-ed piece she wrote.

Surely, it’s only going to unravel his already threadbare reputation further when it goes before the courts next May. Right now, losing a well-paid role in the Fantastic Beasts franchise is, really, the least of his concerns.