Jo Jung-suk in a still from Hospital Playlist season two.

Hospital Playlist was already a long show, but as season two has worn on this summer, episode lengths have increased. Episode five hit 97 minutes, while the most recent, eighth instalment ran to 111 minutes.

It would be nice to report that the extra runtime was there to accommodate some big dramatic swings at Yulje Medical Centre, but if anything, in its midseason stretch, Hospital Playlist 2 has been even less eventful than its occasionally lackadaisical earlier episodes.

Medical shows differ from other series in that they derive their drama not from the lives of the main cast, but from the way these doctors handle the crises of the people who filter through their doors. The personal drama for the physicians when they are off duty is typically of secondary importance.

That said, there have been a handful of personal developments. Lee Ik-sun (Kwak Sun-young), the long-distance girlfriend of Kim Jun-wan (Jung Kyung-ho), broke up with him earlier in the season but she returns to Korea, unbeknown to Jun-wan, and seeks help from her brother Lee Ik-jun (Jo Jung-suk).

Ik-sun is very sick – which is the real reason she broke up with Jun-wan – and has been hiding her illness from him. She gets treatment at Yulje, carefully avoiding Jun-wan, but eventually their paths cross. The first time, Jun-wan is steered away before he can be sure it is Ik-sun he’s seen, while their second encounter, on a bus, closes episode eight.

Ahn Jeong-won (Yoo Yeon-seok) carries on his lovey-dovey relationship with fellow doctor Jang Gyeo-wool (Shin Hyun-bin), but something seems to be going on under the surface with Gyeo-wool, who suddenly visits her mother without a word when she is admitted to a hospital in Gwangju.

Meanwhile, Choo Min-ha (Ahn Eun-jin) continues to have a crush on Yang Seok-hyeong (Kim Dae-myung), who oddly gives her five chances to confess to him and immediately rebuffs her on her first attempt. There’s also Jeong-won’s mother, Rosa Jeong (Kim Hae-sook), who develops a condition that she at first fears to be Alzheimer’s.

We also get a few faces added to the rotation in episode six when a new cycle begins at the hospital, bringing a fresh batch of interns. These new recruits make mistakes and get emotional, but aside from a few light reprimands, the resident doctors frame these events as teachable moments.

These minor personal stories and the band practice finales of each episode leave a lot of time for the criss-crossing patients of the week. The most notable case among this batch of episodes was that of Choi Eun-suk (Kim Hyun), a terminal liver cancer patient with a bad case of jaundice.

Eun-suk’s husband (Kim Hak-sun) is constantly by her side, but attending doctor Ik-jun feels that something is off. Eventually Gyeo-wool also realises that something is wrong and this leads her to confront the husband while he is attacking his bedridden wife. 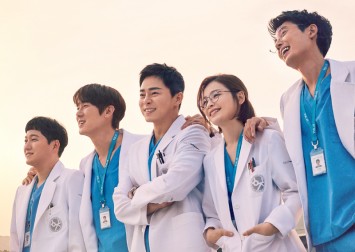 Thankfully, Gyeo-wool escapes a major altercation with him thanks to security guards stationed in the corridor by a suspicious Ik-jun a few days earlier.

Hospital Playlist is a show geared for a broad audience but is particularly targeted towards older viewers – those most likely to be patients – and young parents.

The Yulje Medical Centre welcomes patients from all walks of life, suffering from a variety of relatable cases that are bound to strike a chord with audiences somewhere along the line. But it must be said that the doctors at Yulje have a much better batting average than doctors in the real world.

They manage to save the majority of the serious patients they treat, and they do so with ever-present equanimity and a soothing bedside manner. They are also morally superior to people around them and often help patients with their private woes and even upbraid their more odious guardians when they step out of line.

Yet they’re not just saints at work, they’re also perfect during their resting hours. The most negative characteristic the main protagonist can be accused of is off-key singing. Among these virtuous characters, Jeong-won stands out as being particularly saintly.

He agonised between being a paediatrician and a priest, is an impossibly sweet and caring boyfriend to Gyeo-wool – such as when he sees her asleep during a long shift and stands beside her as a pillow – and a star surgeon whom a crowd of interns mass around when he performs open-heart surgery on a tiny premature baby.

The only blemish on his character is a brief, cute flashback to when, as an intern, he failed to bring a doctor the surgical instrument he had requested. Yet even that turns out to be untrue when it is revealed that the confused intern was actually Ik-jun.

The show’s tightly knit group of musical doctors may beggar belief on occasion, but their interactions together feel real, thanks to the great chemistry among the cast. However, if the running times remain this long, the show will hopefully be able to rely on more that just winning camaraderie.