The characters of The Penthouse have access to vast finance and powerful connections, which they use to solidify their stations and increase their wealth even further, yet these considerable resources are never enough to sate their greed. They also cheat, lie and bribe their way through life, and when all of that fails, some will even resort to murder.

Their influence stretches well beyond the walls of Hera Palace, as the property deals and politicking they engage in have far-reaching consequences, but theirs is an exclusive club to which they dare not admit new members.

Within this hermetic society, smaller family units trump all, leading to endless deceit and back-stabbing. Friendships are shallow and brittle and loyalty is a fantasy.

As the saying goes, it truly is lonely at the top.

At the very top is Joo Dan-tae (Um Ki-joon), the owner of Hera’s penthouse, the villainous orchestrator of most of the show’s pernicious plots, and the character with by far the most blood on his hands. Consequently perhaps, he is also the least loyal character, as he uses everyone around him.

What’s more, although he sometimes pulls strings for them, he seems far less devoted to his children than his neighbours. Maybe this is why his eventual comeuppance tastes the sweetest.

The dizzying highs of The Penthouse have made it must-view television throughout its two seasons , with soaring ratings to prove it, but what goes up must eventually come down, and the series has occasionally stumbled while resetting its direction without a clear crisis on the horizon.

Season 2 reached a terrific midseason climax in episode five during the Cheong-ah Arts School festival with the murder of central character Bae Ro-na (Kim Hyun-soo), but it didn’t really seem to know where it wanted to go after that. A cool-down period was to be expected, but for several episodes, the revelations, double-crosses and dramatic excess that we’ve come to expect from the show were lacking their usual spark.

The Oh Yoon-hee (Eugene)/Ha Yoon-cheol (Yoon Jong-hoon) partnership breaks down and Yoon-cheol gets himself arrested for Ro-na’s murder. Na Ae-kyo (Lee Ji-ah), Shim Su-ryeon’s evil twin sister who showed up earlier in the season, has a few surprises up her sleeve.

As for Cheon Seo-jin (Kim So-yeon), the walls are steadily closing in on her and she’s left with no choice but to make some uneasy alliances.

Sometimes you just have to trust that the writers know where they’re going, even if it occasionally seems like they’ve lost their way. Just in time for this season’s finale, all the pieces finally aligned, the tempo was raised and a secret master plan was gloriously executed, dishing out some much needed just desserts to the manifold sycophants and villains of Hera Palace.

The real estate wars heat up, with everyone trying to buy into a neighbourhood eyed for redevelopment, even though those plans haven’t been made official. This plot thread gives us one of the season’s delightful cameo performances, with Jo Jae-yoon playing a bemused real property agent who accepts their huge gifts and cash bribes.

Also making a welcome appearance is The Uncanny Counter lead Yu Jun-sang as a powerful politician who still holds a candle for one of the main characters on the show.

Read Also
11 new K-dramas showing now and in March, and where to catch them 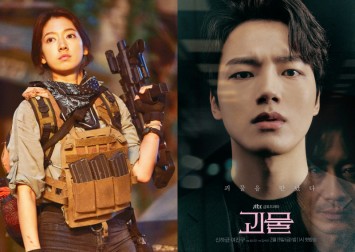 The characters we didn’t see much of in the back half of this season were the children of the leads. They figured prominently in the lead-up to the Cheong-ah Arts Festival, but have largely been sidelined since, except for the delirious Ha Eun-byeol (Choi Ye-bin), who has been gaslighted by her own parents as they try to erase her memories of having killed Ro-na with an experimental drug, when in fact she wasn’t even the real culprit.

While situations are constantly in flux, characters don’t often fundamentally change in The Penthouse – though they do often hide things – so one of the highlights this season has been seeing Seo-jin humbled through several events and threatening to turn over a new leaf.

Her maternal instinct is at the very least equal to her instincts for self-preservation, and there’s a new door open to her character. Whether she chooses to walk through it, we’ll just have to wait and see.

So where do things go from here? We know from the finale that we have two new characters on the way, one, Kang Ma-ri’s (Shin Eun-kyung) newly paroled husband Yoo Dong-il (Park Ho-san), is definitely a villain, while another, Logan’s (Park Eun-seok) handsome friend Joon-ki (Oh Joo-wan), remains a mystery.

Most of the main characters are now in jail, so either force majeure will get them an early release or the story will jump two years in the future, which would be enough for most of them to have finished their sentences. One thing’s for sure, even with his life sentence, we surely haven’t seen the end of Joo Dan-tae.

The Penthouse will return for its third season in June, with each of its 12 episodes airing on a weekly basis, rather than the usual twice-a-week schedule.

The Penthouse season two is streaming on Viu.