With their repetitive storylines and sometimes drawn-out dialogue delivery, K-dramas can be long-winded, but thankfully television is a flexible medium, with formats being altered all the time to fit different stories and mediums.

Streaming services are the most elastic platform yet to emerge for small-screen content, and what we've seen in South Korea are some shows pitched to online audiences with more ambitious but tighter storylines, such as Kingdom.

With eight episodes averaging 40 minutes, it's less than a third the length of a typical series with 16 70-minute episodes, yet it still follows a classic K-drama narrative template.

The show revolves around three characters.

Song Ji-hyo, billed as the lead but who in reality has the least screen time of its three main stars, plays Jo Hee-ra, a witch who runs a restaurant that serves food and grants wishes to desperate clients.

They don't have to pay money for her delectable dishes, but they will end up paying for it somehow, and the cost can easily outweigh the benefits of the wish granted them.

Nam Ji-hyun plays down-on-her-luck Jung Jin, a young woman who finds herself becoming Hee-ra's partner after enduring a series of setbacks, including losing her job and boyfriend and seeing a restaurant she runs with her mother quickly go to pot.

Jin accepts Hee-ra's unusual proposal to take over her failed restaurant, but despite being the most prominent character, her story grinds to a halt for most of the series after a lengthy introduction in the first episode.

Early on, he struggles to juggle his athletic ambitions and scholastic needs and deal with homeroom bullies, but once he finds himself employed as a helper in Hee-ra's restaurant, his story slows to a crawl as well.

From then on, he just quietly pines after Jin, and keeps flashing his boyish smile. 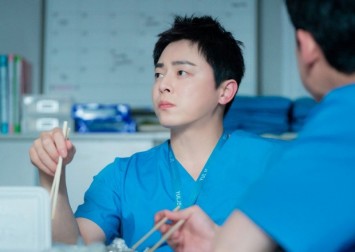 Ha Do-kwon - one of the hidden treasures of The Penthouse - appears in a smattering of scenes as Hee-ra's assistant, and Jin's mother (So Hee-jung) weaves in and out of the story, but that's pretty much it for recurring characters.

Instead, we get a few guest actors to fill up the episodic stories of sad-sack clients who visit Hee-ra's establishment.

Festooned with colourful sets and rich costumes, The Witch's Diner got off to an intriguing start, but after zipping around establishing its premise, the show quickly ran out of steam.

The guest stories were rote and predictable, but more than that, their resolutions revealed something more serious - the show's colourful concept was half-baked.

The Witch's Diner has a starting point for all its characters, after which most of them do a lot of waiting around, until a perfunctory climax reveals the true relationships between them all.

Hee-ra is actually Jin's mother, but while such a revelation was never going to be a huge surprise, the show's lack of depth and character-building robs it of any dramatic impact.

There's no getting around the fact that The Witch's Diner is a badly written show, although whether that is the fault of the source novel, the adaptation, or both, I can't say.

The show's internal logic is off and the characters are underwritten, but more than that it repeatedly stumbles on the smallest steps.

For example, Jin enters into a relationship with celebrity writer Tom Kim (Choi Sung-jae), who anyone can see is bad news.

During their relationship, he repeatedly blows her off, and one day, after calling off a date at the last minute for the umpteenth time, Jin goes to a wedding and in the same building she discovers Tom, who is there with his wife hosting a first birthday party for their daughter.

Never mind the extraordinary coincidence, but why would Tom have scheduled a date with his unwitting lover on the same afternoon as such a major event, which requires an enormous amount of planning?

Shows are allowed some leniency for small inconsistencies, but The Witch's Diner is littered with egregious ones that frankly beg the question: Were the writers even paying attention?

Unfortunately, the buck doesn't stop there, as the show features some of the least effective casting seen on screens this year.

Song is a fine actress and mostly does OK here, but behind her striking outfits and eerie contact lenses there's precious little for her to play with.

Chae, who is a decade older than his character and looks it, also has nothing to do in a role than merely calls on him to smile and pine after the lead.

But the biggest problem is Nam, who lacks charisma and is stiff as the lead character, a role in which she seems miscast.

The Witch's Diner ends with Jin and Gil-yong taking over as witch and assistant of the restaurant.

Let's hope this isn't an invitation to a follow-up season.

The Witch's Diner is streaming on myTV Super.