BTS and Coldplay's My Universe is another example of the blurring lines between Western pop and K-pop.

While K-pop acts like BTS and Blackpink may be getting more popular in English-language music markets, music in English is also gaining a larger foothold in South Korea, a sign of the increasing connectivity of global music industries.

On Oct 8, for example, a few days after Savage dropped, out of popular chart Melon’s top 15 songs, three were by non-Korean artists, and four others, all by BTS, were in English, as well as their bilingual collaboration with Coldplay.

Across most South Korean music charts, Savage, Stay, and BTS and Coldplay’s My Universe have spent the past few days hopping between the top three spots.

Occasionally, there are successes aside from one-off non-Korean songs, such as Anne Marie’s 2018 song 2002, which became a big hit in the country but didn’t gain the same fame internationally, and Bieber is a regular favourite of charts, but those one-offs are becoming increasingly more common in recent years.

According to industry insiders, there are a number of reasons behind the shift in consumer behaviour, but the biggest one is that while South Korean pop culture is gaining popularity beyond its border, the local scene is also becoming more international.

To some degree, this is intentional. Shin Cho, the head of K-pop and J-pop in Asia for Warner Music, says that just as Korean entertainment companies are looking to other music markets for audiences that are becoming more open to foreign content, overseas entertainment executives are seeing Korea in the same light. 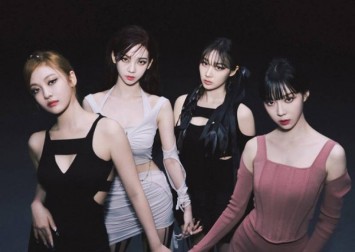 According to Cho, getting a sign of approval from Bang, who has made some of South Korea’s biggest hits for decades, may have helped boost the popularity of Stay in the local market, by creating buzz and assuring audiences that a foreign release might suit local tastes.

Internationally popular releases also receive attention in the local market from films and television shows, while covers by popular South Korean artists have helped boost the popularity of English songs in Korea.

David Guetta’s Hey Mama with Nicki Minaj, Bebe Rexha and Afrojack is in the top 50 songs on Melon after it was featured in an episode of Street Woman Fighter.

Other factors are the rise of TikTok, which is largely music based and full of dance challenges from artists across the world, and recent rights tiffs between Spotify, Apple Music and South Korean music and tech giants.

“The barriers are breaking, because in the end it’s good music,” said Cho.