K-pop group NCT Dream and the creators of hit kids song Baby Shark together released an educational song about dinosaurs today, called Dinosaurs A to Z.

Rather than recreating Baby Shark with the NCT Dream members filling in for the marine animals – though “baby Mark du-du-du-du” would have fit right in – the K-pop group’s soundtrack introduces dinosaur species alphabetically.

The members perform the song in a video animated in the style of other creations from Pinkfong, the South Korean educational media company behind Baby Shark.

Dinosaurs A to Z is the latest in a series of creations featuring dinosaurs released by Pinkfong, including a whole album devoted to dino tunes.

Originally, NCT Dream was created to be a teenage act with members ageing out once they reached adulthood, but that plan was eventually nixed and the group retains its original seven-member line-up.

Read Also
New K-pop releases to look forward to in May, from BTS to NCT Dream 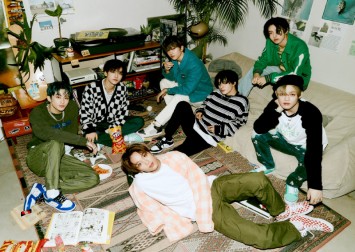 Throughout Dinosaurs A to Z, each of NCT’s 23 members, as well as the unit teams NCT 127, WayV and NCT Dream, all make appearances and are correlated with a different dinosaur, rounding out the English alphabet’s 26 letters.

The Pinkfong tyrannosaurus – famous from an earlier video – appears alongside the members of NCT Dream in the animated music video as they explore the world of dinosaurs.

The release of Dinosaurs A to Z arrives ahead of NCT Dream’s upcoming first full-length album, Hot Sauce. The LP, which has reportedly sold over 1 million pre-order copies, will drop on Monday May 10.