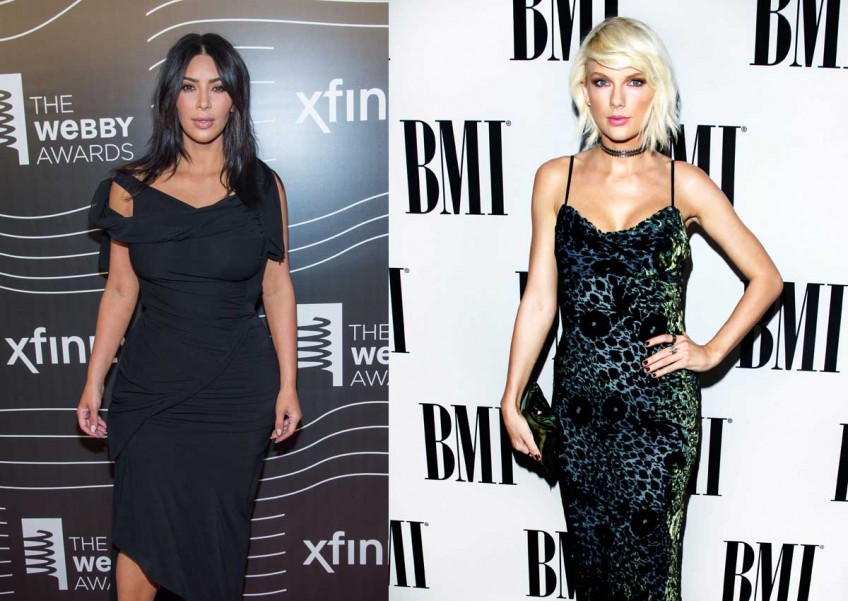 Kanye West's wife Kim Kardashian put out a tape which showed West on the telephone with Swift previewing lines from his song "Famous".
AFP

NEW YORK - Taylor Swift voiced outrage to her millions of fans earlier this year when rapper Kanye West bragged in verse that he made her famous and could sleep with her.

But was the pop superstar's sense of being wronged - which she made clear in her acceptance speech at the Grammy Awards for Album of the Year - insincere?

So suggests the rapper's wife, reality television star Kim Kardashian, who late on Sunday put out a tape of West on the telephone with Swift previewing lines from his song "Famous", released in February on his "The Life of Pablo" album.

In the video, which Kardashian aired through Snapchat, the Chicago-bred West recites the lyrics, "For all my South Side niggas that know me best / I feel like me and Taylor might still have sex." A seemingly upbeat Swift is heard replying: "I really appreciate you telling me about it. That's really nice," as West says he wants her to feel comfortable because he considers her a friend.

Swift denounced the leak of the phone conversation soon after, saying West never told her the next line in the song - "I made that bitch famous."

"You don't get to control someone's emotional response to being called 'that bitch' in front of the entire world," she wrote on Instagram.

"While I wanted to be supportive of Kanye on the phone call, you cannot 'approve' a song you haven't heard," she wrote.

"Being falsely painted as a liar when I was never given the full story or played any part of the song is character assassination," she added.

"I would very much like to be excluded from this narrative, one that I never asked to be part of, since 2009."

She was referring to the MTV Video Music Awards in 2009, when West rushed onto the stage as Swift was accepting an award to say Beyonce was more deserving.

In an acceptance speech at this year's Grammys, Swift sent a message to young women, warning that there will be "people along the way who will try to undercut your success, or take credit for your accomplishments or your fame."

West has not backed down. Last month, he released a video for "Famous" that features him in bed with a bare-breasted woman with a striking resemblance to Swift - as well as other nude doppelgangers of celebrities including Republican presidential candidate Donald Trump.