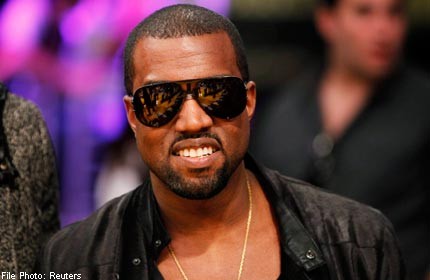 NEW YORK - Rapper Kanye West showed the first picture of his and Kim Kardashian's baby on Friday during the season finale of the Fox talk show hosted by Kardashian's mother, Kris Jenner.

Side-stepping the celebrity tradition of getting paid large sums of money by media outlets to reveal baby pictures, West opted to show the first photo of the baby girl, named North West, in the final minutes of Jenner's show. Fox, a unit of Twenty-First Century Fox Inc, has yet to announce whether it will renew Kris for a second season.

West told Jenner that he and Kardashian "have not attempted to get paid" for photos of their baby, who was born in June.

"I thought it would be really cool, on her grandmother's season finale, to bring a picture," the rapper said before a photo of the child was shown on Kris.

The picture shows the girl clad in a dark outfit, gazing at the camera with her left arm outstretched and a wisp of dark hair curling down her forehead. Jenner said the baby had Kardashian's eyes and West's cheeks.

West, 35, spoke with Jenner about his love for Kardashian, his bad-boy image and his fractious relationship with the media for the entirety of the hour-long show, which was ending its six-week initial run.

Asked whether it was love at first sight with 32-year-old reality star Kardashian, West replied, "Oh yeah, definitely," adding: "I was in love with her before I even got to talk with her."

Kardashian first gained notoriety in 2007 due to an internet sex tape with then-boyfriend Ray J, but she has built a reality TV empire with multiple shows including Keeping Up With The Kardashians, on Comcast's E! Network.

"She's my joy, and she brought my new joy into the world... She's teaching me to be a better person," West said.