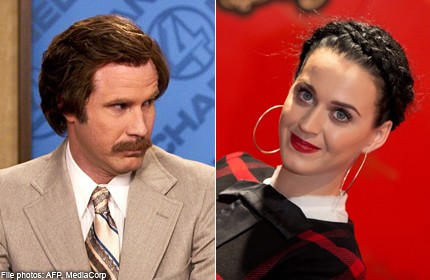 LOS ANGELES - American pop singer Katy Perry and comedian Will Ferrell's fictional news anchor Ron Burgundy will lead stars performing and appearing at the MTV Europe Music Awards, the network said on Thursday, as it seeks to attract a larger US audience for the awards this year.

Perry will sing her new song "Unconditionally" from her upcoming album "Prism" at the awards ceremony held in the Ziggo Dome in Amsterdam on Nov. 10. The singer also landed two EMA nominations, including best female artist.

Ron Burgundy, the suave mustachioed TV anchor of upcoming comedy "Anchorman 2: The Legend Continues," will make special appearances during the awards show, reporting from various landmarks in the Dutch capital.

The MTV EMAs is the network's awards ceremony to honour music artists from around the world, and it follows a similar model to the network's US annual awards shows, the Movie Awards and the Video Music Awards.

Viacom Inc.'s youth-orientated MTV hopes to entice a larger US audience to watch the EMAs this year by airing it a few hours after the live show, which will be broadcast live outside of the United States across MTV's 60-plus channels around the world.

US fans can also vote with international fans in categories including best song, female and male acts, and biggest fans.