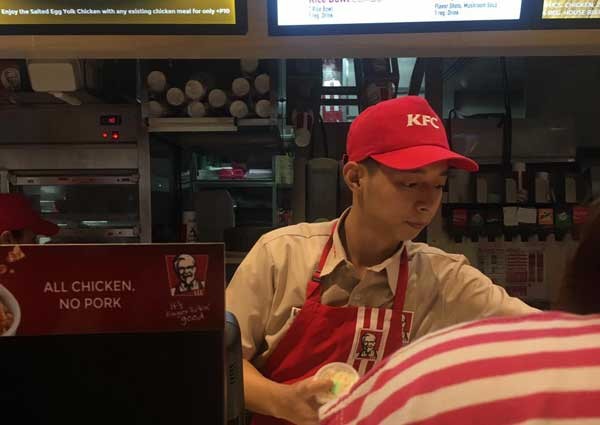 It all started with a photo that went viral and now it's a full-blown contest on social media.

KFC was quick to react to the photo of a young man working for their company who looks exactly like Korean actor Gong Yoo, AKA Kim Shin in Goblin: The Lonely and Great God.

Last Thursday night, they launched a contest on Facebook and it featured their Gong Yoo look-alike posing similarly to the promotional poster of Goblin.

The goal is to look for the look-alike of his bride Ji Eun-Tak, played by Korean actress Kim Go-Eun.

The mechanics are simple. They just need to submit a photo of themselves as look-alikes of Goblin's bride; they can put on makeup and wear costumes to make it more convincing.

The winner will get P5,000 (S$138) worth of KFC gift certificates and of course, a photo-op with their Gong Yoo look-alike.

("I finally found Kim Shin from 'Goblin' and I can see the sword. Does this mean that I am his bride? OMG!!! Hello! I couldn't see his name because it's hidden. But I swear, he really looks like Gong Yoo!! I don't have to go to Korea just to see Gong Yoo!! He's here, I already found him.") Well, ladies. Now's your chance to have a moment with our country's Gong Yoo look-alike, will you be joining?

I feel like Anne Curtis will seeing how she loves Gong Yoo and K-drama.