Kicking up a fuss 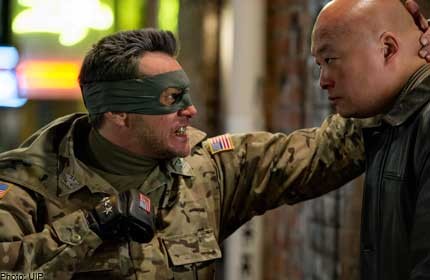 UNITED STATES - Violence is not cool. There's basically no justification for physically harming another person, except in the most extreme circumstances.

That said, it sure would be fun to beat the hell out of certain disagreeable persons, which is where movies like Kick-Ass 2 come in.

The sequel to the 2010 hit Kick-Ass, opening here on Thursday, allows us to stick a vicarious boot up a proverbial butt. It's a catharsis.

We experience mayhem by proxy and leave the theatre feeling cleansed, our thirst for wanton destruction safely purged.

Of course, not everyone sees things this way.

One of the stars of Kick-Ass 2, Hollywood actor Jim Carrey, caused a kerfuffle back in June by stating that he could no longer support the movie in light of the appalling events at Sandy Hook.

Tweeted Carrey, 51: "I did Kick-Ass a month before Sandy Hook and now in all good conscience I cannot support that level of violence.

"My apologies to others involved with the film. I am not ashamed of it but recent events have caused a change in my heart."

As if being associated with one of the great tragedies in US history weren't bad enough, Kick-Ass 2 has also been labelled as rapey.

There's a gang-rape scene in the comic book source material by Mark Millar, and though this bit isn't included in the film itself, there is an attempted rape.

The cumulative effect of all the tsk-tsking by the press has been to turn Kick-Ass 2 into the Must Not See movie of the summer.

Made for US$28 million ($35.8 million), it opened in fifth place at the US box office last week with a relatively paltry take of just US$13.3 million. Its predecessor, with a production cost of US$30 million, went on to earn US$96 million worldwide.

This, despite attracting an uproar over then 11-year-old cast member Chloe Grace Moretz using the "c-word" amid killing and swearing as her teen assassin character Hit-Girl.

It's a shame, really. Kick-Ass 2 tells the story of ordinary people with a hankering to lash out at bad guys.

Aaron Taylor-Johnson reprises his role as the eponymous hero, a high schooler who has inspired copycats to dress up in makeshift superhero outfits and hit the mean streets.

He teams up with a group of these eccentrics, led by Colonel Stars And Stripes (Carrey), to fight his old pal Chris (Christopher Mintz-Plasse), now a supervillain whose nom de guerre definitely cannot be repeated here.

Meanwhile, Mindy (Moretz) decides to give up her Hit-Girl persona in order to concentrate on becoming a regular teen.

All of this may sound like a pretty ordinary setup for a superhero flick, but in execution it's anything but.

Unlike your typical Marvel and DC fare, Kick-Ass 2 is rated M18 for violence and coarse language.

A hand is severed. A head is severed. A dog is unleashed on a man's groin. A boy accidentally kills his mother with a tanning bed. A lawn mower is launched through the windscreen of a manned police car. A woman is stabbed with multiple shards of glass. A girl is tagged with a device that causes her body to release waste materials in an alarmingly graphic fashion.

Finally, the F-word is used 45 times, and an even worse word also gets some play.

We could go on, but you get the idea.

Kick-Ass 2 is not The Avengers, and why should it be?

Colombian-American actor John Leguizamo, 49, who stars in the film as Mintz-Plasse's bodyguard, put it succinctly while speaking to the Latinos Post in a recent interview.

"Violence has always been on film and in literature," he said. "People are going to act the way they want to.

"My favourite violence on film is the type that has real consequences, because sometimes it gets too easy and desensitised and it's not fun to watch.

"I like Kick-Ass and the violence in Michael Haneke's (Funny Games) movies because it actually feels horrible.

Leguizamo is not only handsome, he's also correct. Violence has always been part of our stories - in fact, it's been the main thing for millennia. From Greek tragedies to Shakespeare to Victorian novels, nasty goings-on have always been the motivator of plot lines.

Deep down, we're all rampaging chimps, and art helps us come to terms with that. Everyone is comfortable with carnage on film; it's just a matter of style and degree.

For Carrey, Kick-Ass 2 ended up being too much for him to handle, and that's fine, but that doesn't mean the film is intrinsically evil.

In an interview with BBC Radio 5, Kick-Ass creator Millar noted that it comes included with a built-in ambiguity towards firearms.

"Carrey's character, ironically, is a born-again Christian who refuses to carry a gun because he doesn't want to be a negative role model for children," said the Scottish producer.

But Millar is hoping that Carrey's withdrawal from publicity can help by raising awareness of the film. "People keep saying to me, 'Are you pissed off at Jim Carrey?' No, I'm delighted with Jim Carrey, this is amazing.

Say what you will, but Kick-Ass 2 actually has a much more thoughtful and interesting take on violence than your average action flick. It definitely makes me not want to be lawn-mowered.