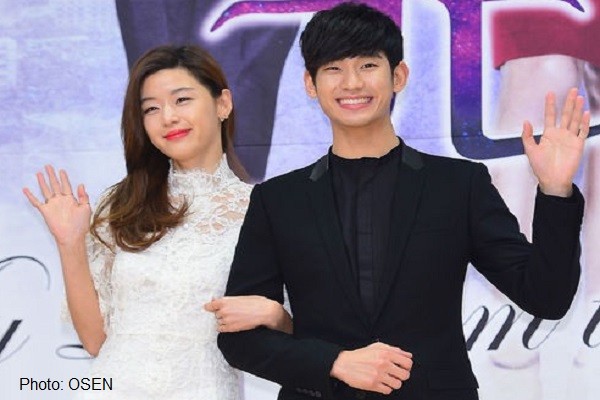 Actor Kim Soo-hyun and actress Jun Ji-hyun, co-stars of SBS television series "My Love from the Star," are competing for the grand prize of 2014 SBS Drama Awards.

Although SBS has many dramas considered as successful -- "It's Ok, That's Love," "You're All Surrounded," "Three Days," and "Pinocchio" -- experts are foreseeing the winner to be Kim or Jun from the hit fantasy romance.

The main reason is due to its incomparable success, striking the average viewing rate of 25.4 per cent and creating a "syndrome" not just in Korea but in all Asian countries. Others on the other hand, remained hitting around 10 per cent, which is much lower than that of "My Love from the Star."

With the confident prediction of the winner being either Kim or Jun, the final "one" between the two is hard to anticipate. Many fans are hoping they could share the honour for their excellent acting and romance portrayed in drama.

However, SBS producer Gam Do-kyung who is in charge of the ceremony conveyed his will to local reports that he wants to "avoid jointly awarding the grand prize," making it hard to predict the result.

The winner will be revealed in the 2014 SBS Drama Awards to be held live on Dec. 31. Both Kim and Jun confirmed their appearances at the event.