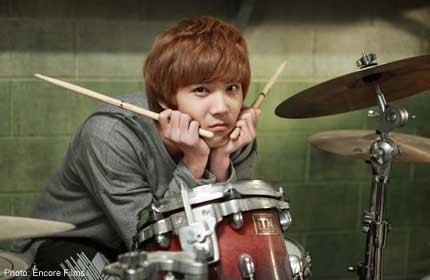 South Korean rock singer Lee Hong Ki was barely in his teens when he debuted as an actor on TV.

Fast forward to a decade later, and the 23-year-old is making the leap to the big screen in his movie debut, Rockin' On Heaven's Door, which opens in cinemas here on Thursday.

Despite having years of acting under his belt, Lee confessed in an e-mail interview with My Paper that he felt a sense of "burden at the beginning" of filming.

Still, the charismatic lead singer of FT Island could count on his own rock-star experience for his role as a teen idol named Chung Ui.

It seems that Lee, who was discovered by a talent agent at a fashion show, has a penchant for reel roles that mirror real life.

The boyish singer also starred in hit 2009 South Korean drama You're Beautiful, as an idol from boy band A.N.JELL.

Referring to his latest role as a hot-tempered singer who is ordered to volunteer at a hospice, he said: "(Chung Ui and I) are both top idol stars. But, unlike him, I don't have to face the trauma of death."

Thanks to his playful personality, Lee reportedly had no issues playing up the mischievous side of the teen idol, but he said that it was difficult to play Chung Ui as the character matures over the course of the film.

Though the movie is set in a hospice, it is touted as a comedy as Chung Ui has to deal with a group of wacky terminally ill patients.

The singer said that he managed to balance the diverse emotions of happiness and sadness by immersing himself in the film's hospice setting.

"Although the hospice itself can be regarded as a place of all kinds of sad stories, the real atmosphere was always convivial," he said.

While the fashionable frontman has been keeping busy with this movie, fans can rest assured that FT Island is his No. 1 priority.

He said: "Both singing and acting are really attractive to me.

"Although my priority is to be a part of FT Island, I've also fallen in love with movies. I'd like to continue both careers for as long as I can."