TAIPEI - Korean actress Song Hye-kyo (宋慧喬) announced that she recently signed a partnership contract with Jet Tone Film production (澤東電影) on the sidelines of the award ceremony of the 38th Hong Kong Film Awards on April 14.

Ever since she took part in "The Grandmaster" (一代宗師), the 2013 Hong Kong-Chinese martial arts drama film by Hong Kong director Wong Kar-wai (王家衛), she has been looking forward to cooperating with the actors and actresses again, she said.

"The director and I are really good friends. I believe in the future I will have many opportunities to work with outstanding Chinese directors and actors," said Song. 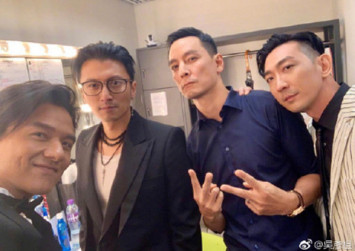 Viewers have praised her "graceful interpretation" of the oriental women, saying that watching was like "observing a piece of art."

Showing up on the red carpet with a piece of stunning black deep plunge dress, Song said that this was the second time that she participated in the Hong Kong Film Awards after a 12-year hiatus.

"This is destiny, I guess. Everything has not changed. The only difference is this is a brand-new beginning for both of us," Song said.