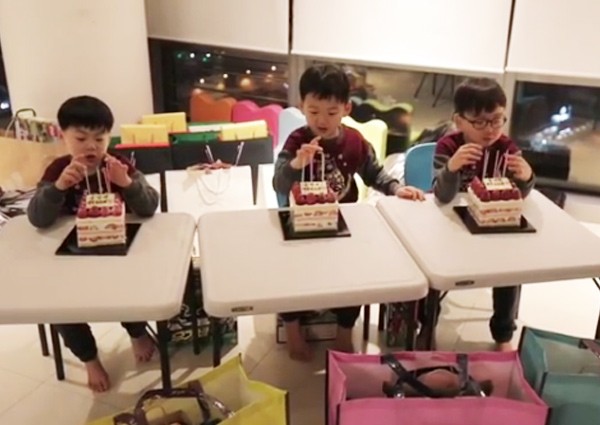 Five-year-olds are as raucous as they get, and when they are triplets, the chaos (and decibel level), as you can imagine, skyrockets.

Not that netizens mind, when it comes to South Korea's most beloved set of triplets - Daehan, Minguk and Manse, who turned five on March 16.

In a video posted on South Korean actor Song Il Gook's Instagram, the boys sing an energetic rendition of "Happy Birthday" in Korean to each other with several false starts, before finally blowing out the candles on their individual cakes.

"Is it okay if I eat the chocolate (on the cake)?" Minguk politely asks, which is echoed by his brother before all three are given the go ahead to dig in.

The video has racked up more than 530,000 views and 21,000 comments on Instagram since it was posted, with fans both in Korea and overseas sending their well-wishes and fawning over their cuteness.

The triplets shot to fame after appearing on the KBS reality programme, 'Return of Superman' from 2014 to 2016, which they starred in alongside their dad.

According to a report in 2015, they were the fifth most popular celebrities in South Korean advertising, raking in a whopping $4.26 million in endorsements.