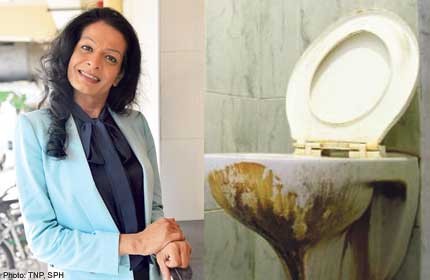 SINGAPORE - Kumar on the big screen as a woman is a rare enough sight.

Kumar in a movie as a female minister? Sounds like a must-watch.

In the 2001 local movie One Leg Kicking, he acted as the mum of comedian Moe Alkaff's character.

But in Everybody's Business, Singapore's best-known drag queen plays the fictional Minister of Toilets Kumari Kuppusamy who, along with hygiene officer John Lu (Gurmit Singh) and Lu's big-talking boss Winston Li (Mark Lee), needs to get to the bottom of a toilet hygiene problem that has resulted in 50 Singaporeans getting food poisoning.

The movie opens here on Dec 5.

On Tuesday, the cast were at a coffee shop in North Bridge Road filming a scene in which Kumari pays a surprise visit to coffee shop owners (played by Liu and Wang) to suss out the toilet hygiene situation there.

As Kumari, Kumar was not quite the flamboyant drag queen we have seen him play at Boom Boom Room or his Esplanade shows.

Looking the part of a bureaucrat, he sported an A-line skirt, a light blue blazer and a blouse and wore his hair in long curls.

The role, said Kumar, was offered to him by local film-maker Jack Neo, who is Everybody's Business' executive producer.

"He said, 'Maybe you should play the minister, it would be more challenging for you," said Kumar, who turned 45 last Saturday.

"He thought me playing a minister would get the audience interested.

"I've always wanted to be in politics, so at least I get to be one in a movie," he joked.

When asked about casting Kumar as a woman, director Lee Thean-jeen, who also helmed the 2011 flick Homecoming, said: "Why not?

"We were trying to think of someone who would bring something new to the project and Kumar is fresh because we haven't seen him in a lot of movies. You know him as a stage comedian. We thought it would be interesting, albeit a bit risky."

Might the risk factor have come from comparisons between Kumari and our own Minister for the Environment and Water Resources, Dr Vivian Balakrishnan?

That was one of the first questions Kumar was asked when he sat down for kopi and a chat with the media.

But he waved those comparisons away, saying that it was precisely such a possibility that made it important for his character to be a woman.

"If not, it would be too close to the real one," he said.

While Dr Balakrishnan turned up for the launch of Kumar's coffee-table book Kumar: From Rags to Drag back in 2011, Kumar said the two are "not really" close and he has not told the minister about his latest project.

And despite the similarity in names, Kumar said that he and his character are nothing alike. In the movie, Kumari launches measures to combat bad hygiene that are hugely unpopular with the general public.

"She's a little uptight and believes in everything that she says. I'm playing someone who's trying to change things, even though people I work with (like John Lu) don't agree."

"It's a lot like how the Transport Minister (Mr Lui Tuck Yew) went to ride on the trains to observe. (My character) wants to find out about dirty toilets so she goes to a toilet to s***. If people get it, they get it."

Even so, Kumar insists that the movie is only "gently digging" at the situation here.

Lee added that the movie does not have an "agenda to satirise or parody any government entity or minister".

He said there was some "consultation" with the Ministry of the Environment and Water Resources, but stressed that there was no pressure from it to "portray any kind of agenda".

The movie is also not sponsored by any government body.

"At the end of the day, we wanted to do an entertaining story, so we had to balance fact and fiction... I think you'll see we try to go as far out on a limb as we can," he added.

That, of course, includes literal toilet humour in the form of "toilet puns", according to Lee.

The cast members themselves needed no prodding to divulge their worst toilet stories, with Gurmit at one point getting off his chair to act out how he thought an errant toilet user had got his dirty business on the wall instead of in the toilet bowl.

But if any of them had to be chosen to be a real-life "Minister of Toilets", Kumar would be a good bet because toilet hygiene is a big thing for him.

"Even when I go overseas, the first thing I check in the hotel room is the toilet. And the towels," he said, grimacing.

"How did the person climb onto the seat?" he joked. Even so, he thinks Singapore has better toilet hygiene standards than some other places he's visited.

"Coffee shop toilets can be really, like, whoa, but when you compare them to places like China, (ours) are better," he said.

So if he were a real "Minister of Toilets", what's the first thing he would do?

Everybody's Business is scheduled for release on Dec 5.