MANILA - Singer-songwriter Lady Gaga took the opportunity to address mental health as she received the Grammy award for Best Pop Duo or Group Performance on Monday.

Lady Gaga won the award with Bradley Cooper for their song "Shallow" from musical romantic drama film "A Star is Born."

An emotional Lady Gaga dedicated her speech to mental health awareness, highlighting it as one of the film's prevailing theme.

"I just want to say I'm so proud to be part of a movie that addresses mental health issues. They're so important. And a lot of artists deal with that," Lady Gaga said.

The 32-year-old singer reminded fellow artists to look after each other and urged those who are "hurting" to seek help. 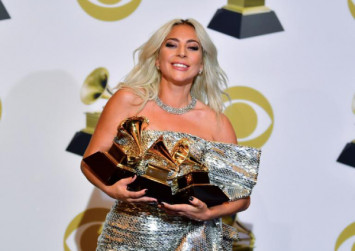 "We gotta take care of each other. So if you see somebody that's hurting, don't look away. And if you're hurting, even though it might be hard, try to find that bravery within yourself to dive deep and go tell somebody and take them up in your head with you," she said.

"I wish Bradley was here with me now. He's at the BAFTAs over in the UK. I know he wants to be here. Bradley, I loved singing this song with you," she said.

Meanwhile, Lady Gaga won Best Pop Solo Performance on her own for her song "Joanne (Where Do You Think You're Going?)"

The 61st Annual Grammy Awards, hosted by Alicia Keys, was held at the Staples Center in Los Angeles on Sunday, Feb 10.