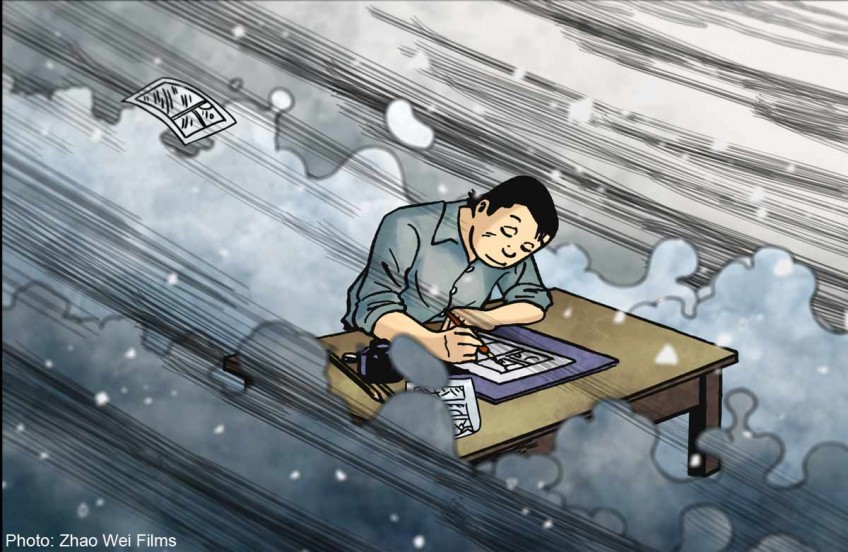 The death earlier this month of Japanese manga artist and storyteller Yoshihiro Tat- sumi will perhaps be felt most keenly in Singapore by film-maker Eric Khoo.

Three years ago, Khoo, 48, wrote and directed an animated feature based on the life and stories of Tatsumi, who died of cancer at the age of 79.

"I had known him for six years and, all this time, he was battling leukaemia," Khoo tells Life!.

During that time, the two had grown close, he says.

Tatsumi, the film, was released in 2011 after being selected to premiere in the Un Certain Regard section at the Cannes Film Festival that year.

It was also Singapore's entry to the Academy Awards in 2012.

The DVD of the film is available in Singapore, but in Japan, distributors plan to release it in June this year to mark Tatsumi's birthday.

Khoo credits Tatsumi's pessimistic tales of urban alienation, confused masculinity and repressed urges for influencing his own early work in comics and in films.

"I owe a lot to sensei," says Khoo, referring to Tatsumi using the Japanese term for master, or teacher.

"I look back now at my short films and many of sensei's characters seeped into them," he says.

In 2009, Khoo had sought out Tatsumi in Tokyo for a first meeting, after Tatsumi's manga autobiography A Drifting Life (2008) reminded Khoo of the man's talents and the seminal role he played in Khoo's artistic development.

After the three-hour conversation, Khoo won Tatsumi's blessings for the film.

The artist's penchant for downbeat realism in storytelling, as well as his straightforward personal style, ran counter to the mainstream in his home country. For that reason, he is more well regarded abroad than in Japan, says Khoo.

"The most remarkable thing about him is that he never lied, never faked to be popular," he says.

Khoo's film wraps a narrative of Tatsumi's early life and work, based on A Drifting Life, around five of the artist's fiction stories.

The art was created in Indonesia by Infinite Frameworks, the project's co-producer, and supervised by Khoo and Tatsumi.

The film sold to 20 countries and Khoo is glad to note that it has helped spark a revival of interest in Tatsumi's books.

Khoo recalls how proud Tatsumi was when he walked the red carpet at Cannes and how, despite the old master's failing health, he could still register his excitement.

"He held my hand and squeezed it. It was amazing," he says.