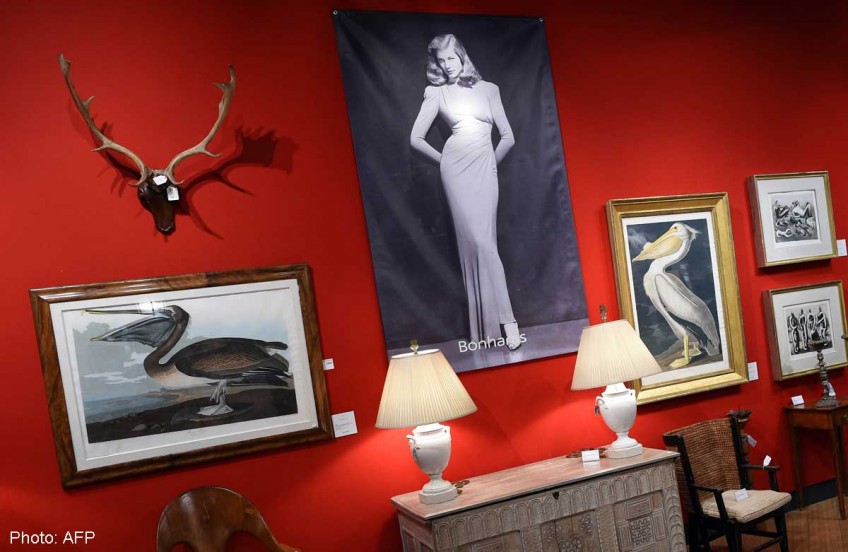 Some items from the Lauren Bacall collection.

NEW YORK - Everything but the kitchen sink would be one way to describe the staggering array of possessions owned by Lauren Bacall that go under the hammer in New York next week.

From fine art to kitchenware, from avant garde to the kitsch: hundreds of items collected and loved by the Hollywood siren go on sale Tuesday and Wednesday at Bonhams auction house.

The collection is nothing if not eclectic. It includes jewelry and clothes, Aboriginal and African art, English and French furniture and items bought in antique shops around the world.

Items that date from her marriage to legendary on-screen co-star Humphrey Bogart and sculptures by English artist Henry Moore are among the most prized items.

"One thing with Lauren Bacall, when she collected she didn't collect because of value or potential value," said Jon King, vice president and director of Bonhams in New York.

Bacall greatly admired Moore, visiting him in England and treasuring his work. She kept most of the small maquettes next to her bed and the most expensive of which is valued at $40-60,000.

At the lower end of the spectrum, die-hard fans with a several hundred dollars might be able to snap up some walking sticks.

Bacall, one of Hollywood's great golden age actresses, died last August aged 89 in her nine-room home overlooking Central Park, which is also on the market for $26 million.

The proceeds of next week's auctions will go to her three children.

Above all they reflect Bacall's personal taste.

From the Bogart years, before he died from cancer in 1957, are his black granite games table and a pair of silver candelabras from their marital home in Los Angeles.

Many of the lots have associations with some of her famous friends drawn from the literary, musical and political worlds.

There is a landscape by English playwright Noel Coward, an invitation to Bill Clinton's inaugural ball complete with handwritten notes from him and wife Hillary, and a lithograph of daffodils painted by the late senator Edward Kennedy.

Bacall was a staunch Democrat and is photographed in the catalogue at a birthday party of Hillary's in New York.

"She was known to be a friend of Democrats. She admired Bill Clinton. She admired Obama too. She thought that he was very strong and decisive and just a very good man," said King.

The piano, used by Bacall to rehearse for Broadway musicals, was also played at parties by composer Leonard Bernstein, with whom her youngest son, Sam Robards, remembers singing Christmas carols.

There are Ashanti scales from Ghana used to weigh gold, a spoon from the Democratic Republic of Congo, combs from the Ivory Coast, and two headrests from South Africa.

The auction house said Bacall became interested in African art while on location for "The African Queen" starring Bogart and Katharine Hepburn, which was filmed in Congo and Uganda.

Other items from around the world include Indian miniatures, a Japanese portable brass tea set and a marble table inscribed with "in the name of Allah" in Arabic calligraphy.

King, who forged a close relationship with the star, said Bacall would have mixed feelings about the auction.

"She'd be very happy to see the response from her fan base. But she loved each and every one of these and probably, I don't know, she'd be sad that it's being disbanded I think."

He says it's possible some of the items could end up in museums, but expects the majority to go to private collectors.

Interest has been "tremendous" from Hong Kong and mainland China, as well as Tokyo, Los Angeles and Paris, Bacall's favourite city, he said.