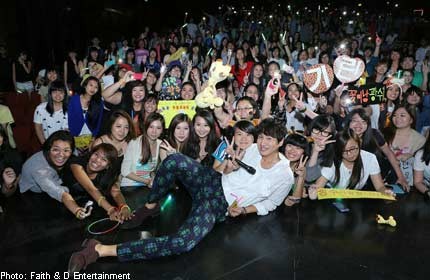 SINGAPORE - Handsome, suave and sexy would not be words used to describe him.

But this South Korean celebrity had 1,300 fans eating out of his hand at his first fan meeting in Singapore at Resorts World Sentosa on Saturday night.

In a rare sight for fan meetings here, men and boys were scrambling to get on stage to play games with the actor-host.

Lee, 28, whose trademark laugh involves his hand covering his mouth, charmed the crowd with his humble and shy manners.

Breaking out often into "I'm sorry! I'm sorry!" or "Thank you! Thank you!" in English every time he interacted with his fans only served to endear the gentle giant to them.

But was this whole underdog routine just an act?

Reports from the South Korean media and testimony from Lee's friends and costars such as South Korean actor Song Joong Ki, who have worked with him on film sets, say that Lee is the real deal.

"His appeal, even to guys, is that he's very down to earth, funny and has that 'poor thing' feel about him that makes you want to root for him.

"He has also shown that you don't have to go for plastic surgery and have superstar looks to be a superstar."

Apart from creating a positive, uplifting atmosphere at the Festive Grand Theatre, Lee also showed off his strong, emotive vocals when he covered Yoo Jae Ha's Because I Love You and Shin Seung Hoon's I Believe to shrill screams and applause from the audience.

Said Lee on stage with the emcee: "What do I do in my free time? I meet up with my friends for movies, we eat a lot and gossip together as well."

Giraffe-printed underwear is what he receives as fan gifts and he made people laugh when he "checked" and sheepishly revealed that he wasn't wearing them today.

Lee said: "No words can express how I feel about the love and support that I have received here so... (kisses microphone)."

The highlight of the 2½ hour event was when fans tried to score the opportunity to go on stage to play games with him.

Some women cried and others swooned when they got kisses on their forehead. Lee also hugged them from behind and carried them piggy-back style.

In another segment, everyone had to stand and show how well they knew Lee.

Little-known facts about Lee were revealed - he has one younger sister, he's a good drinker, he can't play the guitar and he's severely allergic to gingko nuts.

He also appeared bowled over by the "Kallang Wave", which the audience demonstrated in his honour. This was all captured by Lee in a video he took with his mobile phone.

He said: "I love Singapore.